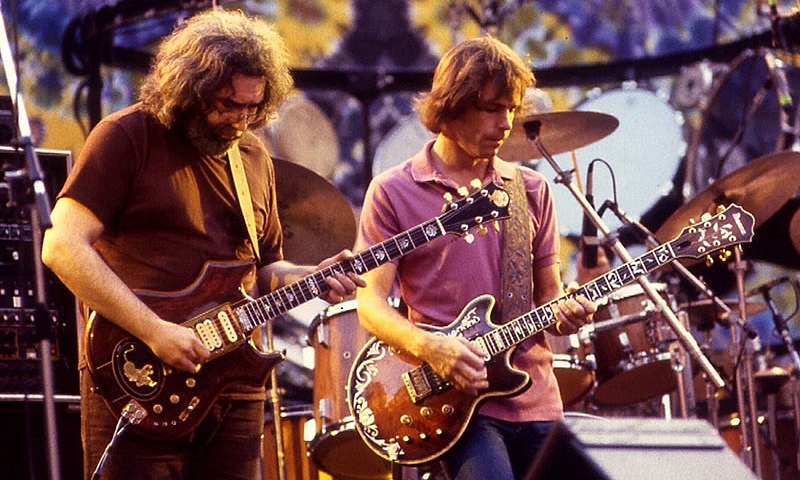 By JACOB HOBSON
September 9, 2013
Sign in to view read count
The author Kurt Vonnegut once said, "Practicing an art, no matter how well or badly, is a way to make your soul grow." The art of improvisation does just that: it makes the soul grow. The soul of the improvising performer is constantly stretched and twisted in search of that unnamed spiritual experience in which lasting art is created in one passing moment. Improvisation allows a musician to take the risk and venture into dark waters in the hopes of a triumphant return so that he may inform his fellow musicians that the water is fine. Nowhere else in music is the art of improvisation practiced as much as it is in jam and jazz music.

Venues often play jazz albums over the loud speakers before the start of a jam band concert. Hedonistic soul searchers, dreaded girls in beads, frat boys in shorts, fat men with beards, and every kind of person from every walk of life finds a way to groove to that jazz music. Although they might not call themselves jazz fans, they are fans of improvisation, and the two cannot be divided. In fact, the argument could be made that jazz and jam music are no more different than jazz and blues. Jam could not exist without jazz.

If one listens to jam music enough, they begin to understand the performers. They feel as if they personally know the performer, because in some ways they do. They know the performers through their sound. Jam music is full of unique improvisers, and just like with jazz, there is no room for the slightly talented. This music requires everyone to feed off each other and contribute equally.

Making the transition from jam bands to jazz isn't a particularly difficult one. One just needs an open ear—one that is fine tuned to the rigor and spontaneity of jam band improvisation. For many people, the easiest way to make the transition is through the organ.

The Hammond B-3 is a staple in jam music that traces its roots back to Gregg Allman of the Allman Brothers Band, Ron "Pigpen" McKernan and Brent Mydland of the Grateful Dead, Bill Payne of Little Feat, and Greg Rolie of Santana. Today, nearly every major jam band has a B-3 player. Widespread Panic has John "JoJo" Hermann, Phish has Page McConnell, The String Cheese Incident has Kyle Hollingsworth, and the Tedeschi Trucks Band has Kofi Burbridge.

The B-3 brings an element of sustain and helps carry those "big" moments in jam band music when the song reaches a peak of intensity. In jazz, Wild Bill Davis and Jimmy Smith created the organ sounds upon which jam bands so heavily rely. Any fan of the aforementioned jam band organists is encouraged to listen to Jimmy Smith's "The Sermon." Listening to how Jimmy Smith manipulates all the switches and pedals of the B-3 while playing complex bass lines with his left hand and maintaining impeccable virtuosity in his right hand is in itself a spiritual experience.

Jimmy Smith may be the single most important musician to bridge the gap between the modern day jam band and the straight-ahead jazz of the fifties and sixties. After the jam band audience has experienced Jimmy Smith, then comes Miles Davis. Bitches Brew (Columbia, 1970) opens the door for jam and jazz listeners alike. Just as the Grateful Dead used songs like "The Other One" and "Dark Star" as vehicles to explore its improvisational potential, this Miles Davis album allows a glimpse into the intensity and melodic fierceness of Davis' sound and improvisation.

It is often popular opinion among jam band enthusiasts that jazz should be entered into via Miles Davis and his later fusion work, but the sometimes harshness and squeal of Davis' later sound can be a turnoff, keeping them from further exploring his canon. Jimmy Smith, however, bridges that gap with a funky grace and tone to which the jam band listener is already accustomed.

Just like any other art form, one must study the influences of their influences. Gregg Allman said, "Tone-wise and lick-wise, there is only one organ player alive ... Jimmy Smith." Just as Jimmy Smith unknowingly helped shape the sound of The Allman Brothers Band, other jazz artists like John Coltrane and Jackie McLean have influenced the jam scene tremendously.

Artists like Medeski Martin & Wood, John Scofield, Robert Walter and Stanton Moore continue to improvise on jazz based funk tunes that fans of jam music find irresistible. The term "jam band" is simply an umbrella term that collects music from all genres. While folk, country, bluegrass, rock and roll, and soul are vital to jam music, jazz may be the most important, because not only does it bring improvisation to the table, it also brings emotion—and emotion and improvisation cannot be divided.

Any jam fan that makes the transition to jazz would be doing themselves a favor by exploring famous jazz covers of their already favorite jam bands. The Grateful Dead used to cover Miles Davis' "So What" and saxophonist Branford Marsalis played with the Grateful Dead numerous times throughout the 1990s. In 1991, Phish covered two Charlie Parker classics in its live set: "Donna Lee" and "Moose the Mooch." In 2003, the String Cheese Incident performed a lively cover of Herbie Hancock's "Chameleon."

While jazz continues to be a less popular music reserved for the intellectual and artistic, audiences for jam music continue to sell out festivals and arenas around the world. In dealing with jam bands, as with any other art form, it is important not to forget those who came before—the pioneers of improvisation who paved the way to artistic freedom.