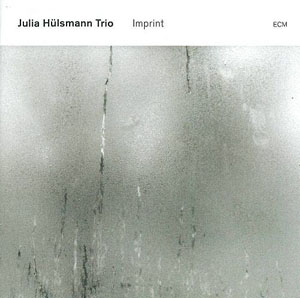 Manfred Eicher's Munich-based ECM Records specializes in spacious, absorbing records that reveal their inner workings, labyrinth-like, over the course of many listens. Some releases reveal themselves from the first note; with others, it can take years. Pianist Julia Hülsmann's sixth record—and second for ECM—Imprint, manages both.

Hülsmann's trio isn't new—it has had more than a decade to establish its stylistic identity. But when the ensemble moved to ECM, releasing its label debut, The End of a Summer, in 2008, something snapped into place that shows no sign of departing.

Imprint's opener, "Rond Point," gives away enough of the record's intent to command immediate attention, and hides enough to sustain it. Bassist Marc Muellbauer is the star of the track, deploying his singing, Gary Peacock-esque tone at just the right moments. Hülsmann and drummer Heinrich Köbberling combine Robert Glasper with Paul Motian underneath and over it all, blanketing the tune in a lushly bleak sound-world.

From this first track, moods come and go, ranging from the suspense of the tense "After The End Of It" and the tenderness of "A Light Left On," to the restrained force of "Lulu." But no track is wildly different from the preceding one, a quality that could be seen either as a drawback or a recommendation. Like many ECM recordings, Imprint is best understood as a suite of sorts, a collection of variations—not on a theme, however, but on a mood.

That mood is best described by one of Hülsmann's own titles: "Storm In A Teacup." A constantly shifting groundwork of brushes swirls beneath Hülsmann's dark chords and melody line, voiced partly in unison with Muellbauer, and partly separate from him. Teacups are not violent objects, and their usual contents, while often hot, are not exactly the stuff of muscular hard bop or caustic Albert Ayler-isms. But, despite the outward tameness, storms do occur, casting shadows and filtering rays of sunlight, making waves and blowing sands.

The storm that Hülsmann's trio creates, within the teacup of Imprint, is a perfect Storm, indeed. This is a polished trio that takes risks, a safe trio that loves danger, a predictable trio that's full of surprises. It is both superficial and deep, and always rewarding. There's one surprise that Hülsmann can't pull off, because from the first note, it's obvious how good Imprint is going to be. But it may take years to know why.

Rond Point; After The End Of It; A Light Left On; Juni; Storm In A Teacup; (Go And Open) The Door; Kauf dir einent bunten Luftballon; Ritual; Lulu's Paradise; Ulmenwall; Zahlen bitte; Who's Next.