Paul Wertico: Impressions of a City 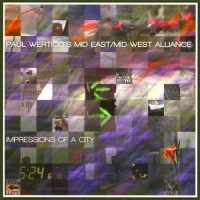 Almost 40 years after its inception and despite many detractors among master musicians and critics, jazz-rock fusion continues to have a tenacious hold on both creators and consumers of instrumental music. Percussionist Paul Wertico's Impressions of a City puts a modern spin on the genre by creating a work that brings together jazz like improvisation and the sound of rock jam bands.

The concept behind the CD is interesting; it is supposed to be free musical impressions of an urban day, but the pieces do not coalesce together, despite being similar in spirit, into a whole that is more than the sum of its pieces. In fact the 18 short tracks (only two are over five minutes) sound like brilliant musical ideas that either are not developed to their full potential or are lost somewhere in the dominating sounds of the jam. There are occasional ECM-esque saxophone solos that feel like the beginning of something intricate and intriguing, but are, alas, short-lived. The rest of the music is drummer-driven bass and guitar interplay, with very little use of silent pauses.

Noise has been creatively used in modern music but it has also been overused. In the case of this CD, although it is used quite interestingly it definitely dominates the individual pieces. The record tries hard to create an atmosphere of a loud city day with electronic effects, fretless guitar jams and arrhythmic drumming, and it does succeed to a degree, but at the expense of the interesting musical ideas that remain stunted and are not further developed.

An interesting concept, with snippets of brilliant ideas and a lot of jamming, even though this album delivers less than it promises it is still worth exploring, given the accomplished and hugely talented artists involved, keeping it from becoming monotonous despite its weak spots.

A Light Too Soon; What Should I Wear Today; Bumper to Bumper; Late Again; Beauty Wherever You Can Find It; The Boss Needs to See You; 15 Minutes for Lunch; I Probably Shouldn't Have Done That; The Inside Track; A Chance to Breathe; Lake Fish Flowers; My Side of the Story; Word Salad; Closing the Deal; Drive at Five; Reflections on the Day; I Think I'm Hungry; Good Night and Good Luck