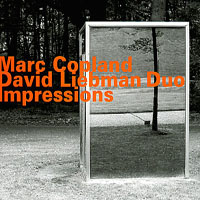 There is no telling what an imaginative musician such as saxophonist Dave Liebman might do if he were given the kind of room to maneuver—to let his soul soar free—as pianist Marc Copland affords him on Impressions. It is as if the pianist gifted the saxophonist with a very large and empty canvas for Liebman to paint a musical landscape. Liebman needs no further invitation to wander off into the ocean of undiscovered sound. The saxophonist assumes the persona of a blithe spirit as he takes off on his musical odyssey. The ineffable spirit of John Coltrane appears to fill the sail of Liebman's swart ship. Magical things begin to happen as Copland arrives again to assist the saxophonist on Herbie Hancock's "Maiden Voyage." Each musician pirouettes around the other as sussing out the other's technique and voice on this shape-shifting musical ocean. Liebman, also beloved of pianists like Richie Beirarch, takes a cue from the Copland, his accompanist. His pristine voice rends the air and he lets notes—screeches, wails and hoots; screams and plaintive sighs pierce the and rip that very air into shreds.

Liebman is more outward bound on this album than he has been at any time in his long illustrious career. He seems to sprout wings as he plays his straight horn; his music is filled with poetry as he makes new things happen with old songs such as Miles Davis' Blue in Green." Meanwhile Copland is as florid as ever, joining Liebman in flipping and warbling and tumbling from his own high line of flight. Liebman often chooses to respond and when he does, he howls and hoots; sometimes two notes at a time and sometimes many. Then seeming to remember his empty canvas, he begins to paint with sound: dripping wet notes like paint on the canvas of the sky, creating Japanese like watercolors and shades and tones. Remembering the catastrophic day in 2001, the musicians let past and present and future collide with immense sadness on "WTC." Their playing becomes more statuesque, with fluttering notes on the soprano; dappling light on those that the pianist plays, incantation fading into the evening sky as the sun sinks behind the neck of water and the musicians play with rich tones and colors.

Saxophone and piano exchange words and notes and voices on "Blue in Green," with both musicians up to taking great risks. Liebman makes a snap decision, changes pace and swings with delight. Launching into "Lester Leaps In," the music sounds like cheerful laughter dappled with whoops of joy. Here, broad vibrato, roughly hewn out of solid air, is rubbed like sandpaper, wobbling sweetly. Finally and like playful kids the two launch into "When You're Smiling" and they play their hearts out until the musical clock runs out. But the swagger of both men echoes on. This single-disc reissue of Bookends (Hatology, 2002) is a recording like no other.