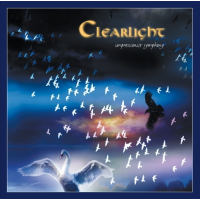 French keyboardist Cyrille 'Clearlight' Verdeaux's 1974 issued Clearlight Symphony is purportedly a venerated gem by many progressive rock enthusiasts. Here, the artist celebrates the 40th anniversary of the initial release with a new venture, featuring the original cast of GONG band-mates, Steve Hillage (guitar), Tim Blake (synth, Theremin) and Didier Malherbe (reeds). Verdeaux asked the trio to reunite for this new symphonic impressionist rock project. Prominent prog artists such as Paul Sears (drums) of The Muffins and other notables lend their faculties on an album that offers a transparent and rather symmetrical fusion of classical music and rock, outlined with impressionism, paintings and inspiration gleaned from classical masters, Satie, Debussy and Ravel.

Verdeaux's classical artistry emits a prismatic aura, and as you get deeper into the program—largely consisting of flourishing symphonic works—a consortium of striking melodies blossom. Malherbe's flute work on "Time is Monet," rides above strings, synths and Craig Fry's regal violin phrasings, propelled with a blast of fresh air that signals the wit and whimsy of Britain's fabled 1970s Canterbury scene. Moreover, the band reshapes the momentum into a warmhearted environ, hued with a stunning melody propagated by Verdeaux's cascading notes. But the following piece "Pissarro King," casts a conspicuous deviation amid Hillage's resonating licks and a pulsating rock groove, dappled by Blake's spurting synth lines. Other works contain overlapping electronics effects, eddying thematic developments, thriving prog-classical buildups and memorable hooks. Hence, Verdeaux's translucent unification of classical music and rock is a gratifying listening experience, augmented with harmonious accord and the artists' scintillating interplay.