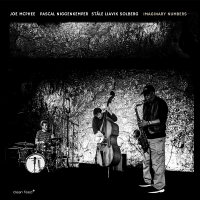 Veteran multi-instrumentalist Joe McPhee always seems open to encounters with like-minded spirits wherever he finds them. Some of his finest albums have stemmed from his collaborations with groups of younger musicians, such as Spontaneous Combustion (Otoroku, 2015) with Decoy and Skullduggery (Clean Feed, 2015) with Universal Indians. On Imaginary Numbers he teams up with two high-profile European improvisers, New York-based German-French bassist Pascal Niggenkemper and Norwegian drummer Ståle Liavik Solberg. Both are adept at the arcane blend of improv texture and post-free pulsation within which McPhee excels.

They follow a satisfying narrative arc through three seat-of-the-pants navigations which take them across diverse territories including extemporized airs, tender dirge, and fiery rapture. For McPhee, pursuing a melodic bent against a churn of clanking momentum remains a favorite gambit and one that functions as effectively as ever here. McPhee is a consummate purveyor of the post-Ayler New Thing. He demonstrates fearsome control of dynamics, reveling in dissonance and skronk, but is never afraid to dial back the intensity to allow new ideas to develop.

Niggenkemper has become one of the most adventurous bassists plying his trade in NYC, uniting timbral exploration with Big Apple attitude. He combines well with Solberg to create an unruly rattling and thwacking undercurrent which keeps McPhee on his toes. The drummer's tumbling percussive style, builds on the work of progenitors such as Paul Lovens and Tony Oxley, readily maintaining a pulse while avoiding precise metric demarcation.

At 23-minutes, "i" is by far the longest cut and illustrates the empathy between the three men. It opens with a marvelously spacious but spiky dialogue, through which McPhee weaves impressionistic pocket trumpet smears. One particularly noteworthy moment arises from the commingling of McPhee's upper register trumpet and Niggenkemper's wiry arco, all anchored by a thudding clatter from Solberg which recalls Milford Graves in its earthy tonality. But it is to tenor saxophone that McPhee turns when he means business, characteristically juxtaposing lyricism and glossolalia, and then when all else falls silent indulging in spine-tingling vocalized overtones.

Even in his late 70s, McPhee hasn't lost his appetite for risk-taking and, as this disc shows, the rewards can be substantial.

i; A; Zero Supreme Love.