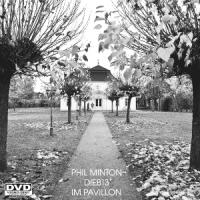 The mini DVD feature the complete duo concert of British vocal artist Phil Minton and Austrian turntables master dieb 13 (aka Dieter Kovačič}, filmed at the Music Unlimited Festival 23, Wels in Austria in November 2009. PanRec, a video label that focuses on jazz and improvised music, already dedicated a whole documentary film to the festival, Unlimited 23 (2011). Minton has been a frequent performer in this festival since its beginning and dieb 13 saw him perform for the first time there.

This brief 26-minute performance remarkably captures the visual and sonic essence of free improvisation. The three cameras of director Pavel Borodin document the intuitive invention of sounds, all kinds of sounds, weird and eccentric as they may be—and Minton refers to these palette of sounds as "positive" ones—the shaping of these sounds in space, the sensitive, attentive listening, and the immediate, playful communication between these two distinct, original improvisers.

Obviously, both do not wish to conform to any convention and feel natural with their busy talk comprised of fragile crackles, hisses, white noises, whispers, moans and crackles. Surprisingly, this highly original interplay even develops as a dramatic narrative, an unstable and fractured one, but with intriguing, emotional peaks, best reflected on Minton's expressive face.