Freddy Cole: I'm Not My Brother, I'm Me

By JOEL ROBERTS
November 13, 2004
Sign in to view read count 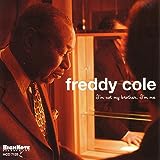 Despite its unfortunate title, I'm Not My Brother, I'm Me is much more a tribute to Nat "King" Cole from younger brother Freddy Cole than a declaration of Freddy's independence.

A fine singer and pianist in his own right, Freddy has spent his career in the shadow of his much better-known sibling - even three decades after Nat's death. The two share an almost uncanny vocal resemblance, both in terms of the distinctive smoky timbre of their voices and their smoothly swinging styles. Although Freddy has a somewhat gruffer, bluesier edge, it's inevitable that listeners will think of Nat when hearing Freddy, especially when, as on the current album, the younger brother performs the older one's material and uses the same trio lineup (piano, guitar, bass) Nat used on his early jazz hits.

That being said, I'm Not My Brother, I'm Me is well worth hearing for Freddy Cole's expert treatment of ballads and standards and, most of all, a delightful 10-minute medley of Nat's biggest hits. Originally recorded and released on Sunnyside in 1990, the album also includes Freddy's self-penned tribute to Nat, "He Was the King", which celebrates his brother's "velvet voice" and remembers him fondly as "the king, second to none". After that, perhaps we can forgive the somewhat defensive tone of the title tune that closes the album, which proclaims, "I'm not trying to fill nobody's shoes/My brother made a whole lotta money, I sing the blues."

Clown Town, Where Did Everyone Go? How Did She Look? Home Fried Potatoes, Overjoyed, I Just Found Out About Love, Like a Quiet Storm, Brandy, Sunday Monday or Always, More Than Likely, To Whom It May Concern, Funny (Not Much), The Best Man, He Was the King, Nat Cole Medley, I'm Not My Brother I'm Me.