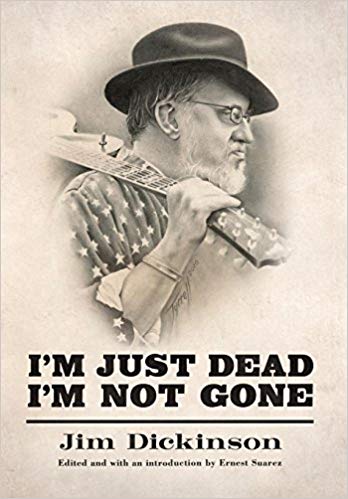 "We got stiffed on the gig and drove back to Waco in silence. The sun was coming up over the Brazos when we got back to campus. That was the end of my career with Ramsey Horton and the K-otics, but I learned his Floyd Cramer licks, without which I would not have known what to play on the Rolling Stones' session in Muscle Shoals."

It is funny where your reading leads you as a function of your past.. After recently completing Robert Gordon's entertaining and informative Memphis Rent Party: The Blues, Rock & Soul In Music's Hometown (Bloomsbury, 2019) I was reintroduced to the presence of the formidable Jim Dickinson. Dickinson was well known to me and any other regional folks in orbit around the Home of Rock & Roll, Memphis, Tennessee. We crossed paths while I was in graduate school at Ole Miss (where I was to also meet Dick Waterman, Willie Morris, James "Son" Thomas, Larry Brown, and Barry Hannah). I completely took all of this for granted at the time only to revisit in it all memory 40 years later.

Dickinson was a curious character who had a minor presence nationally, but a titanic presence regionally in his native Mid-South. But that does not even begin to tell his story. Dickinson was born in Little Rock, Arkansas and raised in Chicago and Memphis. He "attended" Baylor University, proving an unlikely Baptist acolyte, later transferring to what was then Memphis State University. All along, Dickinson did what he did best: accumulated far-flung friends and contacts. During his youth, Memphis was a hotbed of music, home to several recording studios, including Sam Phillips Sun Records, Chips Moman's American Studios, and John Fry's Ardent Studios, where Dickinson worked as a producer, working with bands like the 31st of February (with a pre-Allman Brothers Band Butch Trucks).

As a session musician, Dickinson had a crazy knack for being in the right place at the right time. He was at Muscle Shoals in 1969, when the Rolling Stones, just completing their US Tour, came and recorded "Brown Sugar," "You Gotta Move," and "Wild Horses," the latter on which Dickinson played tack piano. He contributed to the Flamin' Groovies' album Teenage Head (Karma Sutra) in 1971. He developed a sound relationship with guitarist Ry Cooder, performing or producing on more than ten recordings beginning in 1972, most notably worked with Ry Cooder on nearly a dozen records beginning in 1972, including Boomer's Story (Reprise, 1972), and the soundtracks: The Long Riders (Warner Brothers, 1980), Southern Comfort (Warner Brothers, 1981), and Paris, Texas (Warner Brothers, 1985). In 1997, Dickinson was on hand to provide electric piano and pump organ on Bob Dylan's Time oft of Mind (Columbia, 1997). Dickinson was never in the thick of it, but was always close by.

Dickinson's memoir, taken from his personal writings, begins at the beginning, but ends at about 1980. What is missing from this memoir was the story of Dickinson and the enigmatic Alex Chilton, leader of the Memphis bands The Box Tops ("The Letter"), Big Star ("September Gurls") and member of Tav Falco's Panther Burns. Dickinson and Chilton had an interesting history that included Dickinson producing Big Star's self-immolation Third/Sister Lover (PVC, 1978) and Chilton's reputed solo masterpiece, Like Flies on Sherbert (Peabody, 1979) as Chilton publically lost his mental health.

I'm Just Dead, I'm Not Gone is a breezy, fast read through Dickinson's eventful, if downhome, life. The memoir is replete with stories like that opening this article and Dickinson's description of the Rolling Stones having completed recording Mississippi Fred McDowell's "You Gotta Move," and moving on to making history:

The next night was different. They started with heavy guitar. Keith was in G tuning, but he didn't sound like Furry Lewis...

...It is the perfect tuning for Richards and the Stones, swinging with an arrogant snake drive that instantly takes you to the midnight party in the Moroccan whorehouse. The riff Keith introduced that night in Muscle Shoals in the old coffin factory was perfect, hitting the augmented five chord of the blues progression, creating the turnaround pattern to hook the lyrics and push the verse back to top form.

Keith sang what weren't words but grunts and groans, painful and sexual. Jagger wrote on a green steno pad as if taking dictation. He was translating. When he had the idea, he walked away, humming to himself. He circled the room like a buzzard over a carcass. After what seemed like not enough time, he turned over three pages of the lyrics to "Brown Sugar."

That is a nice bit of being the fly-on-the-wall. Dickinson's account of the recording of "Wild Horses," on which he played a tack piano, is equally memorable:

"The song was different [from "You Gotta Move" and "Brown Sugar"] too. Keith had fathered a son, Marlon; this was a lullaby. "Wild Horses couldn't drag me away" was about Keith not wanting to tour. He had a fully developed melody and chord progression, a complete chorus, and sketchy non-word verse melodies. Jagger took his green steno pad and walked to the lounge where the old beanie-weenie machine and coffee pot were located. This song took him a little longer...

...As they started to run down the son, Ian Stewart rose from the piano and started packing gear that wasn't used, as if leaving. "Well," said Jagger. "I assume we need a keyboardist..."

[The Rolling Stones] were too out of tune for the studio's concert grand and the Wurlitzer. I couldn't see giving Keith the old E-note tune-up routine. I sought the old upright tack piano in the back of the studio where they had their cocaine stashed. When I started to play, Not-Spanish Tony woke from a deep sleep and moved the stash, making quite a little dramatic scenario. I found a section of the old piano just out of tune enough to work with the Stones, and started trying to interpret the chord chart I had gotten from Keith. It was instantly apparent something was wrong. Keith had just learned to write a "Nashville system" chord chart, where the chords are represented by numbers and look like a phone number.

Bill Wyman saw me having trouble, and said "Where'd ya get them chords, mate?"

"I got them from Keith."

"Pay no attention to him," he said. "He has no idea what he's doing. He only knows where he put his fingers yesterday." this was the best description of rock 'n' roll guitar playing I have ever heard."

And Dickinson extrapolated that same spirit into all of his projects. Reckless, unreproducible, classic. Dickinson's writing and storytelling were so infectious, it bears including all of the excerpts here. One aspect of his character was a wicked sense of humor, that is best illustrated in two passages, from two opposite sides of his career. Early on, Dickinson was involved in the creation of The Country Blues Festival in Memphis in the mid-1960s. By the second annual festival, Dickinson had soured o the idea:

"I boycotted the second Country Blues Festival. The Hippy fringe element was out of control. Lee Baker fronted and all-black band, complete with horns, called Funky Downhome and the Electric Blue Watermelon. He burst on stage out of an exploding outhouse, riding a Harley Davidson Motorcycle, wearing a polka-dot dress and playing "Stormy Monday" on an old Gibson non-cutaway archtop big band guitar. It was too much for me."

Juxtapose that story against this one recounted in Robert Gordon's Memphis Rent Party:

"The best thing I did on that session was a song called "Tiny Hineys and Hogs" about Harley riders. I had two Harleys in the studie, one of them playing rhythm —it was held open —the other one was playing the beat. The guy was retarding the spark to get it on the beat and then giving it gas to keep it from dying. It was shooting four feet of blue flame. It was unbelievable. The whole studio filled with carbon monoxide.

Knox Phillips, he's Sam's son and also a producer, his friend was visiting —Mike Post, who does TV theme songs [Law & Order, Law & Order: SVU, The A-Team, NYPD Blue, Renegade, The Rockford Files, L.A. Law, Quantum Leap, Magnum, P.I., and Hill Street Blues]. I was wearing this hat with a feather that hung down into beard. Mike Post was afraid of my hat, and when he saw the motorcycles, he was terrified, thought he was in the presence of some kind of insanity. The fucking motorcycle takes a solo; it sounds like a saxophone at one point. Everybody is saying, the motorcycle is right on the beat!" Of course, everybody is playing with the motorcycle, that's what's really happening. Real good session."

Dickinson died August 15, 2009 following cardiac surgery. His life was one well lived and the energy he returned to the cosmos makes us all better. 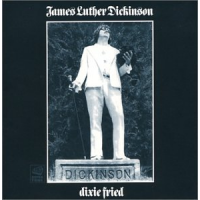 I do not believe that Jim Dickinson thought he would get rich with this recording. Assembled at the end of his and the Dixie Flyers' relationship with Jerry Wexler and Atlantic Records, Dixie Fried sounds like a vanity record made by a genius who did not take himself seriously while recording with an exceptional band. The firepower that the Flyers bring to the sessions is impressive. Listen to Aretha Franklin's Spirit in the Dark and this recording and you will see what I mean.

The Jim Dickinson of Dixie Fried displayed his great glee in simply horsing around. Dickinson could have been considered the "anti-producer's producer" in that he wanted to push the envelope to something nearly unmarketable. He once said of Exile on Main St., I think Exile could have been a motherfucker as a Stone's single record. Keeping the slop, that's what I'd keep.

The disc opener "Wine" blasts our and betrays early a large Jerry Lee Lewis influence. I don't suppose one that one living so close to Hernando's Hideaway could escape the gravitational pull of Tha Killah. The most curious piece is Dickinson's realization of the early Bob Dylan tune "John Brown," a beautiful, drug-induced fever dream of a dirge. The remainder of the recording carries on in the same vein -great musicianship -less than great singer (on purpose).

Andy Beta wrote in Pitchfork in 2003:

I can think of no better way to sum up Jim Dickinson.