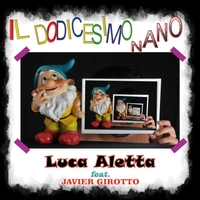 Sicilian pianist, composer, and teacher Luca Aletta graduated with honors in jazz music from the Conservatory of Trapani and studied with Salvatore Bonafede, Lauro Rossi, and Gian Carlo Mazzu. In other words, Aletta has jazz flowing through his veins. Equipped with such knowledge and vast experience, Aletta has created an album that personally reflects his emotions and passion for his craft.

"Il Ciclista" opens Il Dodicesimo Nano with a stellar example of a musical creation that is modern, edgy, and has a lot of range. Like its namesake, this track is like a cycle of emotions. Listening to it is like travelling through a series of slopes that go up and down, in and out. The excitement gradually builds up as the song goes on. Despite the complexities in the song, the musicians are able to play cohesively and create a smooth transition all throughout its duration. What a good way to put a scintillating track at the start of the album.

"O Cao O Gato E O Rato" is more on the adventurous side of things as it has the mood of festivity and celebration. It is a fast-paced and fun-filled cut perfect in awakening the grooviness in one's soul. Listening to this one can surely make a person upbeat. It may not be as explosive as another track on this album ("Samba of the Little Wing"), but it is guaranteed to be just as equally stimulating to the ears. Personal, climactic, and reflective are the three words that best describe "Riff Ballad," which mainly emphasizes on Aletta's talent and skill in playing the piano. Aside from being relaxing, it is also one of the more emotional songs on the album. The accompanying instruments do not overpower the keys and they do provide good support that makes the tune dramatic in a very beautiful way.

Il Dodicesimo Nano is a wondrous collection of Aletta's outlook and feelings that give life to his music, showcasing his skills and taking listeners on a festival of emotions.