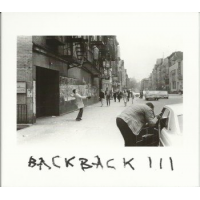 The initial impression of the jazz/rock trio Backback is that they take their cues form the Boston 90s indie band Morphine because the trio features the baritone saxophone of Marc De Maeseneer in most of their compositions. Indeed, III opens with the blues/funk/rocker "Joe" that riffs off of the deep grooves of rock. The trio is a stripped down garage jazz outfit with De Maeseneer, drummer Giovanni Barcella, and guitarist Filip Wauters.

This recording, a follow up to their self-titled debut in 2006, is a crammed excursion at just 36 minutes. III features nine brief tracks (the longest at 5 minutes), but is nonetheless fulfilling.

Their recipe consists of squeezing music from the contrasting sharpness of guitar and the bluntness of the baritone saxophone, all fueled by the dynamo of Barcella's drum kit. He pushes the happenings ever forward, drilling his mates on "Heat," part surf rondo, part speed jam. The trio can trawl a slow blues "Tautavel," blend math/rock with a New Orleans groove "Rumble," or cook a blues ballad "Anneke" with a congruous convincing argument.

ADVERTISEMENT
The more open pieces, like "128" and "Outro" demonstrate their improvising skills. Maybe it's De Maeseneer's switch to tenor that cues the band to open their books and work away from the written notes. The latter piece edges into dream-like atmospheres of circular breathing saxophone and bowed guitar. All very cosmic, and all very satisfyingly enigmatic.