Sometimes you think you've heard it all, but then something comes along to let you know that there is even more. This was clearly the case on January 31, when Cuban drummer Ignacio Berroa and his quartet, consisting of Los Angeles-based Ben Wendel on sax, Otmaro Ruiz from Venezuela on piano and Mexico-based Rene Camacho on acoustic bass. Dizzy Gillespie best defined Ignacio as "the only Latin drummer in the world, in the history of American music, that intimately knows both worlds—his native Afro-Cuban music as well as jazz." The quartet had been advertised as a Latin jazz quartet, and for those of us who did not know Ignacio's breadth, we expected the usual—congas, heavy on percussion and that Latin beat. Surprisingly, there was almost none of that style. Instead, the quartet rose to the occasion by giving us one of the most impressive straight-ahead jazz concerts laced with bits of Latin to grace the Douglas Beach House in a long time. 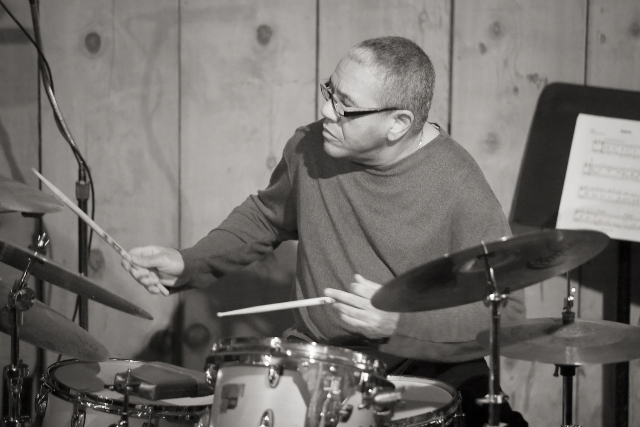 With the opening number, "Matrix" from his Grammy-nominated album Codes (Blue Note, 2006), it immediately became obvious that Berroa was the master of his trap set and knew its place within the overall band. At first, he clicked out a rhythm on the rim of his snare drum, giving the tune a Latin flavor before morphing into straight-ahead, high-energy jazz, which was bolstered by Ruiz on piano and Camacho on bass. As the tune developed, Wendel ran through the notes, ripping up and down, pumping his big tenor sax, obviously consumed by the music. All the while, Ignacio's drums could be heard laying down the grove in the background, holding everything else in place. At times Berroa brought to light his drum's overtones, adding significance to the music.

By the time the fourth tune, "Obsession," came on, the band had warmed up to both the music and the audience. This tune had more of an overall Latin beat to it than earlier numbers. Camacho and his bass were featured on this one, and he took it away with a singular intensity that filled the venue. Right alongside of him was Wendel on soprano sax; the two played back and forth with each other. At places during the performance, Ruiz ran up and down the keyboard, and it felt as though he made the piano sparkle.

When Berroa concluded the first set of the evening, the audience gave his band an extraordinarily rare standing ovation. Long-time jazz photographer Peter L. Buranzon said, "I was ... impressed with the music and the talent of all the players. There are many great drummers out there, but he blew me away with his fluidity and style—never overpowering, never too loud and very sympathetic, a true master that I am grateful to have seen." His sentiments were shared by many. Linda Goetz, who co-produces the concerts at the Douglas Beach House, said, "It was one of those moments that you hope for in a live show. I think Pete [Douglas] agreed when I reminded him of a quote of his that I'll paraphrase: Maybe presenting live music is an addiction—always hoping for that next rush of 'it doesn't get any better than this' and being able to share it with an audience that also 'gets it.'' For me, it was one of those moments, making it all worthwhile."

In the second set, the music took the audience up another notch in their appreciation of the quartet and Berroa. On that Sunday, we were treated to an earful of beautiful, stirringly performed jazz the way it's supposed to be played. The audience rose to their feet at the final note of "Woodyn' You," which is also from Codes. The ovation was nothing less than heartfelt gratitude from all.