By KARL ACKERMANN
December 16, 2016
Sign in to view read count 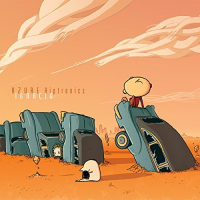 Azure was established in 2006, by guitarist Rogier Scheemann and pianist Pierre-Francois Blanchard, both studying at the Royal Conservatory of The Hague. Only Scheemann remains from that original group. With their first recording There Were Stars (Self-Produced, 2007), the group laid a framework for style-hopping, not just from track-to-track, but even within specific compositions. The latest iteration of the group—now rechristened as Azure Hiptronics—exponentially builds on that premise with Ignacio.

As a core quartet, Scheemann is joined by keyboardist Federico Solazzo, David Barker on drums and bassist Luciano Poli, all of whom appeared on the previous date, Hiptronics (Azuremusic, 2014). The fourteen original tunes are credited to various members of the quartet, four of those compositions being under two minutes.

The group has coined a description of their music as "Ultrafunkatronicjazzhiphop" which speaks for itself even if it doesn't roll of the tongue. At all of nine seconds, "Thgie Neves" opens the album with a passage of electronics and segues into "Work Out Something." Scheemann utilizes voice encryption for distortion on this piece that sounds like an electrified Earth, Wind & Fire tune. The title track is dominated by a heavy rock beat, and thrashing guitar. "Marlino, the Medieval Squirrel" is emblematic of the schizophrenic style swings of the group; part funk, part rock and some smooth jazz added in.

"Easier Each Time" and "Airing" feature guest vocals from Bachir Charaf though the pieces could not be more different; the first being a soul/funk/electric jazz hybrid and the second a strong Middle-Eastern theme. "Saraswati Mantra" begins as the most obviously jazz-focused piece but it too takes on an exotic Asian flavor as it progresses. There is a bit more lyricism in "Wavily" and identifiable jazz fusion in the closing piece "Seven Eight," but these are rare examples of clarity across the program.

There's little question of the level of talent and scope of material among these musicians and composers, but Ignacio can be disconcerting in its shifting of stylistic themes. Three of the tracks on Ignacio clock in at under twenty seconds and are electronic interstitials that do little more than add to the mélange of cross-pollinated compositions. It would be a real benefit to hear Azure Hiptronics pare down the sub-genres in the future. Ultrafunkatronicjazzhiphop, as a pseudo-genre, can impair focus and take away from the listener appreciation that these musicians deserve.