Konstrukt & Joe McPhee: If You Have Time

By MARK CORROTO
November 25, 2015
Sign in to view read count 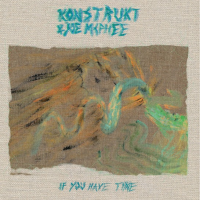 There was a time when free jazz was a mysteriously strange and exotic beast, a music that evoked the "what did I just hear?" response. Today's jazz snob may quote the motto of the rock band Jane's Addiction and tell you "nothing's shocking." And that may be true. That is, if one's ears are not open to the energy and intelligence of musicians like Joe McPhee and the Turkish improvising ensemble Konstrukt.

Konstrukt has performed and recorded multiple concerts with guests like Marshall Allen, Akira Sakata, Peter Brötzmann, Evan Parker,William Parker, and If You Have Time is their second release with the tenor saxophonist/pocket trumpet musician Joe McPhee. The previous being Babylon: The First Meeting Of Istanbul (Roaratorio, 2014), a live date made three days before this studio session.

While the live recordings capture the energy of the ensemble, this studio date is a superior listening experience.

The LP (yes, vinyl) opens with McPhee's short poem calling music a "love beast" and asking us to put our ears close to "hear....something." Indeed, it does. "In The Lair Of The Dried Rat Dog," a possible a reference to the 1994 duo recording by Peter Brötzmann and Hamid Drake, opens with the retro-space sounds of theremin and Moog with Özün Usta's bowed bass animating the affair. McPhee's pocket trumpet slurs and skitters across the science fiction. Next up, "How Long Has 'Trane Been Gone (for James Baldwin)" continues with the unearthly theme. Organ and bass are accented by Korhan Argüden's cymbal work until the piece is sliced open by the two-tenor attack of McPhee and Korhan Futacı. The title's reference to John Coltrane (and his Meditations period) pushes the energy jazz buttons that would later be called on for the live recording.

"Frippe's Dream," is the band's tribute to Bengt "Frippe" Nordstrom, the Swedish free jazz (almost forgotten) legend and contemporary of Albert Ayler. If you are not familiar with Nordström, Futacı and McPhee sound much like Ayler and Pharoah Sanders here. The lengthy piece opens with a cavalcade of horns, then Usta's bass and Çağlar's guitar introduce us to Eastern sounds that serve as backdrop to the plaintive cries of saxophone.

The music revives that "what did I just hear?" feeling. Amen.

Something (poem); In The Lair Of The Dried Rat Dog; Tell Me, How Long Has ‘Trane Been Gone (for James Baldwin); Frippe’s Dream.