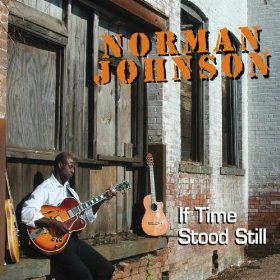 Norman Johnson was in high school in Jamaica when he heard George Benson and became interested in the guitar. He says that he was mesmerized by Benson, and though he figured that he was too old at 16 to begin playing an instrument he went ahead. Later studying at the Hartt School of Music with Jackie McLean and Brian Keane, his influences grew to include Wes Montgomery, Earl Klugh, and Andres Segovia. Segovia fostered his love for classical music and, along with Klugh, the nylon-string guitar.

Johnson is comfortable in several styles. He realizes them through different lineups, with the underlying factor being his enunciation. He is a clean and nimble player who imbues a lyrical sonority to his textures.

"All In Time" is crafted on a nylon-string guitar. The melody is gracious and flows smoothly. Johnson gives it pith with his emphatic notes that cavort when he is upfront and form counterpoint with the ensemble lines. The hue gets deeper as the arrangement opens up to trombonist Steve Davis and the jumpy rhythms of percussionist Martin Obeng and drummer Arti Dixon.

A trio version of the soothing "Midnight Sun" finds Johnson creating a liquid groove that makes the tune shimmer; his pace deliberate and the dynamic gentle. He gets some good support from Obeng and bassist Tyler VanOstrand, who adds muscle with tensile, symmetrical lines.

Johnson finds a funky "Acoustic Groove," a solo outing that is abetted by overdubbed bass and programming. This has an endearing melody as well. He could have well let it play out prettily, but he adds bite and fleshes out the body to make it tantalizing.

Johnson balances themes and tempos well enough through his playing and arrangements. It certainly augurs well for the future which, hopefully, will produce more fine music.

It's Time To Fly; Acoustic Groove; Always and Forever; As It Is; Starting Tomorrow; Can I Get An Amen; If Time Stood Still; Unforgiven; All In Time; Midnight Sun.