Sting: If on a Winter’s Night

By NENAD GEORGIEVSKI
February 20, 2010
Sign in to view read count 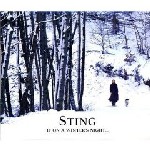 Usually, winter is seen as a time of darkness, cold, and depression; a time of solitude and sometimes dislocated isolation. It is a time of stillness when all nature sleeps and everything is subdued. But it is also a time of renewal, a cleansing and a periodic cycle before everything awakens. The winter is also time of repose and celebration centering around Christmas and the holiday season. It is no wonder that winter holidays are centered around light and songs with subjects of renewal and a brighter, better life.

What began for Sting (aka Gordon Sumner) as recording a cycle of songs related to Christmas soon expanded into songs devoted and inspired by the winter season. Sting's latest music excursion should not come as a surprise, arriving right after the successful Songs from the Labyrinth (Deutsche Grammophon, 2006), his recording of songs by John Dowland, a 16th-Century English composer, lutenist, and singer.

If on a Winter's Night is full of songs that evoke the spirit of the season. It's often been said a composer is like a painter whose canvas is time and these songs focus on the coldest time of the year. Instead of choosing to walk the tired and well-trodden path of covering Christmas classics (the standard seasonal repertoire), Sting chose to take a different path by drawing his selection of songs from various sources. The choice of songs is rather obscure, spanning over several centuries including traditional Northumbrian ballads, lullabies, Christmas carols, and poems. The list also includes a few original songs from Sting's catalogue that suit the occasion, like "The Hounds of Winter" and "Lullaby for an Anxious Child." The title of the album was taken from a book by Italo Calvino, "If on a winter's night a traveler."

In his own words, the theme of winter has always been rich in inspiration and material. There are 17 songs on this CD and Sting shapes these old songs into a captivating contemporary statement with timelessness woven through every measure. The musicians gathered are more than just a backup band: each member is a skilled musician and is given ample space to shine. It seems like the band is fusing early music, folk, and jazz sensibilities and it all blends beautifully to make this a gorgeous whole.

This is deeply personal, profound music, with thoroughly engaging variety in each song. With each song, they capture the feel of the dark season and the album's simplicity conveys both the celebration and quietude that characterizes this time of the year.

If on a Winter's Night delivers a warm ambiance and at the same time coldness as hushed as the winter landscape and solace portrayed on the cover. The insightful selection of material, the artful arrangements, and the beautiful performances highlight the songs' universality. The songs may relate to one season in the year, but will be enjoyed well past this winter.

Gabriel's Message; Soul Cake; There Is No Rose of Such Virtue; The Snow it Melts the Soonest; Christmas at Sea; Lo How a Rose E'er Blooming; Cold Song; The Burning Babe; Now Winter Comes Slowly; The Hounds Of Winter; Balulalow; Cherry Tree Carol; Lullaby To An Anxious Child; Hurdy Gurdy Man; You Only Cross My Mind in Winter; A Cradle Song (bonus track); Coventry Carol (bonus track); Bethlehem Down (bonus track).