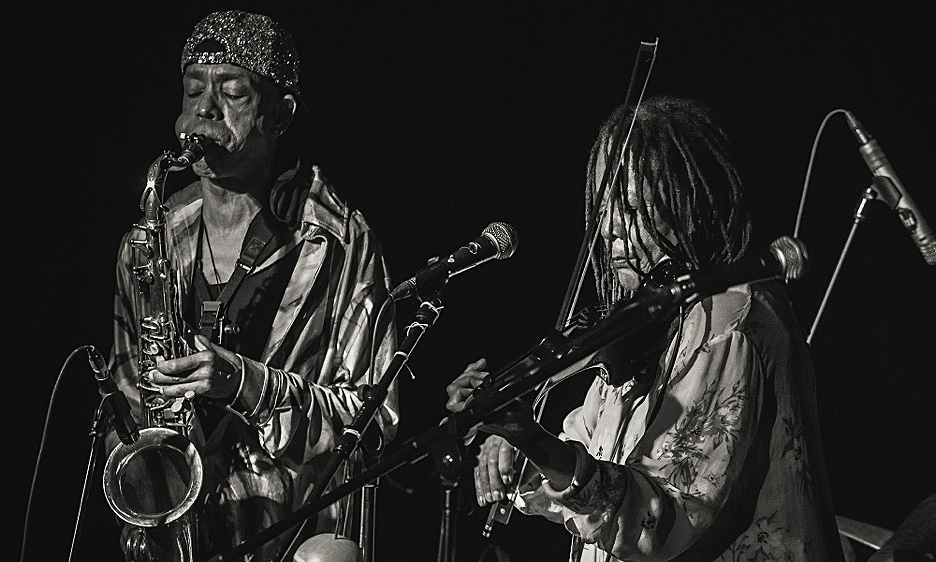 Idris Ackamoor and the Pyramids filed in from the rear of the Black Box, rattling and blowing an array of exotic instruments—none more so than the leader's didgeridoo-esque horn-pipe. Winding its way to the stage, it engaged the crowd in a call-and-response chant. A pact of sorts was thus sealed between musicians and audience from the off, ensuring that the giving, over the course of the two entertaining hours, would go both ways.

This was the final gig of a twenty-one-date European tour, but if there was any fatigue in the Pyramids' ranks it was well masked in an energetic show that largely featured music from An Angel Fell (Strut Records, 2018).

Multi-instrumentalist Ackamoor doesn't hide the Sun Ra influence, but rather embraces it, from his spangly attire, the African percussion, the chants and sci-fi soundscapes to the musician's weaving their way, playing and chanting, through the crowd. "Walking in the galaxy through the universe," went the chant on "Silent Days"; for Ackamoor, like Herman Poole Blount—as Ra came into the world—space is indeed the place.

Nor does Ackamoor hide his politics, his songs addressing the salient issues of racism and police brutality in the USA, and, more generally, the threat to the environment. The tone of his message, however, was colored not by anger, but something akin to a prayer for love, respect, tolerance and equality. He didn't preach but gently implored, leaving the music to do the talking.

The leader switched between tenor and alto saxophone throughout the set, swapping lead roles with violinist Sandra Poindexter, whose searching, intensely constructed improvisations commanded the attention. Poindexter is the only remaining side-member from We All Be Africans (Strut Records, 2016) -Ackamoor and the Pyramids' comeback album after a three-decade hiatus. An exceptional violinist, Poindexter also contributed vocals and one of her own tunes -a vibrant Afro-Cuban romp.

The title track to the above-mentioned album, with its mantra-like vocal refrain, spluttering sci-fi effects—courtesy of Molina's Kaoss Pad and pedal board wizardry—and a gently billowy tenor saxophone solo conjured the hippy-trippy headspace of early-1970s Gong. Gradually, a dub-reggae groove steered the Pyramids into "Land of Ra," with Ackamoor stepping down off the stage to deliver a sinewy tenor solo that, at its edges, flirted with free-jazz. A little Ellingtonian grace imbued the slow, melodic swing of "Papyrus" -the tradition being but a small step from Duke Ellington to Sun Ra and onwards to the Pyramids.

Molina and Styler stepped up on "Soliloquy for Michael Brown" -the guitarist's blues-tinged fire and the bassist's flowing lyricism providing the centrepiece of a stirring lament born of the police shooting of eighteen-year-old Michael Brown Jnr. in Ferguson, Missouri in 2014. It would have made a powerful closer to the opening set, but instead the band went into the break with the cheery, though somewhat lightweight, chant-based "Sunset."

The second set served up more of the same sci-fi colored Afro-jazz funk, though if anything, the sextet played with even greater energy, inspired perhaps, by the dancing that broke out in pockets of the crowd. Ackamoor gave more attention to his Keytar in the second set, though his interventions were more ambient than virtuosic, lending sci-fi color to Poindexter's extraordinary soloing. Fiery African percussion and sassy Cuban son grooves kept the dancers engaged, with the incombustible Mestayer more to the fore, yet the Pyramids were at their most persuasive when they locked into collective grooves that served as launching pads for Ackamoor—on either saxophone—and Poindexter.

The environmental protest song "Message to My People," composed in the aftermath of Hurricane Katrina, saw Polzer and Molina conjure a storm with rumbling snares, lashing cymbals and guitar distortion. Thereafter, a slow-burning groove provided the canvas for a gutsy alto saxophone solo and, in turn, a psychedelic-hued improvisation from Molina. The final song, "Warrior Dance," with its vaguely hip-hop-inspired rhythms, paid homage to the North American plains Indians. Poindexter soared on electric violin before Ackamoor, down on the floor, embraced earthier musical channels with a snazzy display of tap-dancing.

Donning a washboard and brandishing spoons, Ackamoor then led the Pyramids off stage in an old-time jug-band workout, with rattling percussion and no fewer than three harmonicas blazing. The crowd stomped, clapped and whooped as the musicians filed out the same way, and in similar joyous manner, to the way they had entered. Sun Ra, you feel, would have approved.