By EYAL HAREUVENI
February 16, 2012
Sign in to view read count 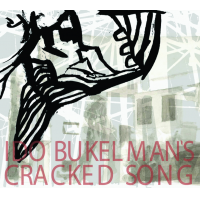 Looking back at gifted Israeli guitarist Ido Bukelman's discography— his improvised solo album, The Door (Kadima) and Solo (OutNow, 2011) and his experimental electronic trio EFT (OutNow Recordings, 2012)— his Cracked Song quartet is clearly more straight-ahead. Bukelman navigates this quartet in a musical journey after a song structure, within the framework and freedom of improvised jazz. Explicitly he pays homage to the formative figures of his musical upbringing, most notably saxophonist Ornette Coleman and guitarist Jimi Hendrix.

This quartet is comprised of experienced musicians: cellist Yuval Messner has a classical background, led Israeli art rock outfits and collaborates regularly with improvising musicians; while bassist Assaf Hakimi and drummer Udi Shlomo are close collaborators of Bukelman and recorded with him on his 2009 self-produced debut, City Tail. Messner shines on the melancholic, acoustic opening, “Still,” a lyrical chamber jazz suite with restrained dramatic changes and a clear reference to the ECM school, especially during his emotional duet with Bukelman on the acoustic guitar.

The rest of the compositions reflect on a melodic theme but do not linger on it. “Nechodi Bird” is a touch and go play with such a theme, borrowing Coleman's harmolodic logic, but more of a showcase for Bukelman on electric guitar. “City Tail” is a rearrangement of the title-piece from Bukelman's debut, with its clear storytelling narrative intensified here by the addition of Messner. “Flowery” flirts with a ballad structure, but the spiked guitar lines and spare interplay undermine this structure. Messner leads the beautiful “The Songs Drift,” beginning as a slow, spare duet with Bukelman but soon gelling, on “(To The Cracks),” into a denser, tighter texture.

Only the concluding song is a return to the melodic mode. An emotional, warm cover of John Lennon's “Julia,” with Bukelman following its original arresting melody on acoustic guitar.

Ido Bukelman’s Cracked Song is another testimony to the creativity and versatility of Bukelman as a composer, player and a leader.