By KARL ACKERMANN
August 2, 2015
Sign in to view read count 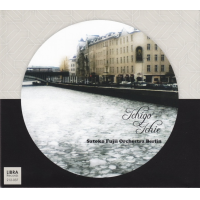 If there is any doubt that a Satoko Fujii orchestra is an ensemble of a different color, one simply needs to look at the bleeding-edge personnel that have played a part in her New York, Chicago and several Japan based versions. Now a Berlin variety of her troupe presents Ichigo Ichie, the pianist's first European player dominated big band. Like all of Fujii's compositional collections, she creates and arranges to the strengths of the assorted band members and the results here are as stellar and unusual as has long been indicated through the prolific body of her work.

Four of the five tracks on Ichigo Ichie are sequential movements of the title and were originally composed for the 2013 Chicago Jazz Festival; the title's English translation is "Once in a Lifetime." With the opening track "Ichigo Ichie 1" we immediately enter a realm beyond normal analysis. An extended drum solo-duo leads to what feels like a full orchestra closing crescendo only to be followed by near silence with only Roder's minimal bass. Tamura enters with his unorthodox puffing/breathing techniques, creating gusts of wind before settling on a fractured melody. The larger group returns in a kind of slurred accompaniment where the horns and drums dominate.

Throughout the remaining three parts of the suite, there are varying degrees of participation from the ensemble, often abruptly changing from loud and full orchestration to a pensive, lone solo as happens early on in "Ichigo Ichie 2" where Tamura again takes over, this time more melodically. This piece swings back and forth landing on a wild saxophone improvisation near its conclusion. Parts 3 & 4 are frequently abstract with near-mainstream flourishes that tend to emphasize just how far off the beaten path the countering ideas are. Fujii keeps her piano at a distance through most of the recording but takes some very percussive solo time on the closer "ABCD."

The pieces on Ichigo Ichie are successful—in large part—due to a clear presentation of Fujii's musical objectives, despite the often busy nature of the compositions. Each piece contains multiple evolutions, each transformative in unpredictable ways from powerful and sober to exhilarating and mischievous. She embraces simplicity in the same measure as the extremes of complexity and shape-shifts the orchestra to represent traditional functionality or smaller group effects. The music on Ichigo Ichie can be as abrasive as it can be melodic and it often summersaults through the tumult and silences at breakneck speed. Fujii is an enigma best appreciated with repeated listening and an open mind.