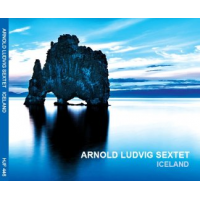 Situated in the North Atlantic, roughly equidistant from Scotland, Norway, and Iceland, the Faeroe Islands are one of the last places one would expect to find a thriving international jazz scene populated with world-class improvisers and a record label dedicated to documenting all of the action. Tutl Records, founded in 1977 by the Danish jazz musician and composer Kristian Blak, is dedicated to the popularization of Faeroese music of all stripes, including the jazz-based efforts of Blak's own band, Yggdrasil. It's worth mentioning that John Tchicai, Anders Jormin, and Tore Brunborg have all passed through Yggdrasil's ranks.

Iceland is the second album by electric bassist Arnold Ludvig, also a native Faeroe islander. Ludvig's bass chops are formidable, indeed, and Iceland is replete with top-notch performances by an international cast of players. Particularly impressive is guitarist Alain Apaloo. A native of Togo who also leads his own Afrobeat-influenced band, Api Pipo (which includes reedists Simon Spang-Hanssen and Mariane Bitran), Apaloo is a consistently engaging soloist with a distinctive tone—somewhat along the lines of Jeff Beck or Steve Lukather—that borrows equally from rock, jazz, and blues. Long-time fans of European jazz will certainly recognize the name Simon Spang-Hanssen. A first-call saxophonist based in Denmark, Spang-Hanssen has recorded at least 15 albums as a leader, and guested on recordings by Nguyên Lê, Orchestra National de Jazz, and Michael Gregory Jackson. Several of his current groups also include members of Ludvig's band: Apaloo, Bitran, drummer Niclas Campagnol, and pianist Marko Martinovic.

From the opening strains of "Miles Beyond," it's quite apparent that Ludvig's primary influence is Jaco Pastorius. Ludvig's tone and phrasing borrows heavily from the Florida Flash, as does his predilection for mellow tropical jazz fusion. Without dipping directly into a Latin-jazz bag, most of Ludvig's compositions are redolent of the sort of music one would expect to hear in sunny southern climes. Ludvig's actual Latin jazz forays, "Corazon de Cuba" and "The Wren and the Raven," while better than capable, capture the requisite feel without trying too hard to be authentic. Though neither tune goes anywhere unexpected, both provide a worthwhile setting for Bitram's lovely flute work. Somewhat weaker is "Pacifizm," a rather pat samba-based tune that gets uncomfortably close to elevator music.

Behind Apaloo's brilliant soloing and Campagnol's aggressive—but not overpowering—drums, the band digs particularly hard into a blues bag on both "Miles Beyond" and the somewhat spooky "Gamlarætt." Apaloo, Ludvig, and Campagnol also cut loose on "Tough Goin,'" an old-school jazz-rocker with a pitch-perfect Rhodes solo by Martinovic. There's even some Billy Cobham-inspired double bass drumming on this one! "Desire" is a melancholy waltz that features some of Ludvig's most impassioned soloing. Despite its sing-song melody, the moody harmonic setting for "Gróthúsvatn" hints at some of the more interesting directions Ludvig and his excellent band are capable of exploring.

Stylistically, the music on Iceland falls somewhere between that of the Yellowjackets and the last couple of Weather Report albums; polished and somewhat predictable tropical jazz fusion that occasionally flirts with the smooth jazz sound of bands such as Spyro Gyra and Iceland's own Mezzoforte. Truly, the main strength of Iceland lies in the highly engaged, active musicianship of Ludvig and his bandmates. While Ludvig's compositions are no great shakes, spirited soloing and fresh, in-the-moment, group interplay are Iceland's saving graces.