By BRUCE LINDSAY
September 16, 2012
Sign in to view read count 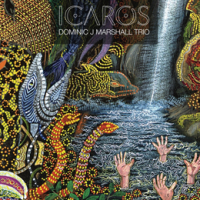 Just who is Dominic J Marshall? A little bit of George Shearing, a spot of Esbjorn Svensson, a modicum of Robert Glasper and a smidgeon of Neil Cowley are all present on Icaros, the second trio album from the young pianist. Lest this sounds like Marshall is a man who has yet to find his own voice, it's worth stating at the outset that such a combination has blended together to create an individual sound: Marshall is Marshall.

Marshall comes from Bannockburn, a village in Scotland best know for a battle in 1314 which saw the Scots vanquish Edward II's invading army. After studying at Leeds College of Music, Marshall relocated to Amsterdam, where he is now based. He released his debut trio record, The Oneness (Self Produced) in 2011, while in his parallel career as a beatmaker he's released a series of recordings. Clearly, a busy musician. Just as clearly, as his playing and writing on Icaros demonstrate, a talented musician with an ability to mix contemporary hip-hop and electronic influences with those from recent decades of jazz history.

The pianist is blessed with a genuinely exciting rhythm section. Dutch bassist Tobias Nijboer and Latvian drummer Kaspars Kurdeko are tough, dynamic and imaginative players and deserve recognition for their part in creating the Trio's distinctive sound. Kurdeko is readily able to contribute punchy and powerful beats, but he's also a very melodic player. Nijboer is a fluid and creative pizzicato bassist while his arco work— heard all-too-briefly—is delicate. The pair can also swing with old school style, underpinning Marshall's playing on "Sphere"—perhaps inspired by Thelonious Monk—with a rare elegance that matches the pianist's own.

In the company of this excellent rhythm section, Marshall's contributions as a writer—all of the compositions on the album are his—and as a player are consistently enjoyable. His solo opening to "Smile For Us" has grace and melancholy; on "The Basement," he shifts from hard-hitting percussive phrases to jagged chords to funk with ease (and the help of Kurdeko and Nijboer's superb rhythm playing) before ending with a minute or so of gentle classically-influenced playing; "Pointer" highlights the confident energy in his lower register work.

Marshall had just turned 23 years of age when he recorded Icaros in June 2012. He's a precocious talent, still absorbing influences and experimenting with his approaches to playing and composition. Exactly where he'll end up is not yet clear but he certainly has an approach to the piano trio that shows real promise for the future— particularly in the company of Nijboer and Kurdeko. Icaros is a fine album, a promise of even greater things to come.

Loose In Your Atmosphere; Pointer; Smile For Us; Sphere; Ojos De La Pastora; Makarska; The Way Of The Dinosaurs; Alongside Aliens; No Umbrella; The Basement.