Allison Neale: I Wished On The Moon

By BRUCE LINDSAY
January 11, 2015
Sign in to view read count 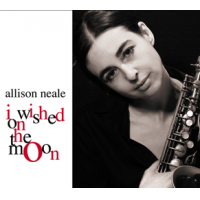 Classic tunes, played by a young alto saxophonist with a distinctive tone, impeccable taste and a talent for recruiting three of the best bandmates around. Add a quartet of guest appearances by a fine young Milt Jackson-inspired vibes player. Do the music justice by ensuring high-quality sound. Presenting I Wished On The Moon, the third album from Allison Neale.

Neale, born in the USA when her British father was working for Boeing in Seattle, returned to the UK as a young child. Her father's love of jazz meant that the West Coast followed her back to England—Stan Getz and Paul Desmond were early influences, followed by Art Pepper and Lee Konitz. She's still a major fan of West Coast saxophonists and also cites a diverse array of players including Frank Wess, John Coltrane and Wes Montgomery among her favorites.

British jazz writer Dave Gelly described Neale's alto tone as "so light and airy that it melts at the edges." It's a memorable turn of phrase, but it would be a mistake to infer that there's any hint of weakness or frippery in her playing. Neale swings—if she didn't she'd sound very out of place alongside her fellow musicians—and her playing exudes a quiet confidence. She's confident in her approach to recording as well—"the old fashioned way" as she puts it, one take, straight to tape.

To complete the band on I Wished On The Moon, Neale has the effortlessly swinging drummer Steve Brown and bassist Julian Bury and the elegant pianist Leon Greening. Vibes player Nathaniel Steele is a most welcome guest—the bright, sparkling, sound of Greening's piano and Steele's vibes forms the perfect complement to Neale's alto.

Brown's swinging drumming opens "I Wished On The Moon." Neale enters four bars in: the lightness of tone is immediately apparent but Neale's soon soloing and it's obvious that there's strength and imagination underpinning her phrasing—she matches Brown's power and flair when they trade fours. The melodic "How Little We Know" is beautifully crafted, Neale and Greening's solos building from and exploring the melody imaginatively. Pepper's "Chilli Pepper" flies—Steele adding another layer of sound to this joyous rendition. Marty Paich's "Sidewinder" is similarly speedy, with Neale, Greening and Steele all soloing with verve. The up-tempo swing of Cole Porter's "So In Love," driven with precision by Brown and Bury, closes proceedings on a high.

I Wished On The Moon; How Little We Know; Chilli Pepper; Resonant Emotions; You're Looking At Me; 317 East 32nd St; Sidewinder; The Breeze And I; The Night We Called It A Day; So In Love.