Kayo: I Wish You Love 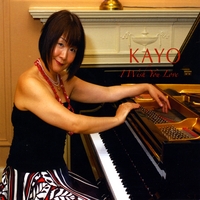 Should jazz challenge conventions or uphold traditions? While opinions vary on this matter, pianist Kayo Hiraki leans toward the latter school of thought on this all-standards affair. As the daughter of a classical pianist, Hiraki had music flowing through her veins at birth and proved to be a child piano prodigy. She honed her craft at the renowned Kunitachi Music College in Japan, came stateside in 1988 and developed her artistry through studies with the great Barry Harris and Larry Ham, and released her debut album a decade later. Since that time, Hiraki has released a string of leader dates, and when she isn't holding court at Arturo's in New York City's Greenwich Village she even manages to find time to tour Europe and her native Japan.

On I Wish You Love, Hiraki and her trio mates center in on top shelf material and, while everything is fairly straightforward, that doesn't mean it's boring. Guest spots and stylistic variety keep things from getting stale, as Hiraki takes a trip through the familiar. Some of these pieces are given take-me-as-I-am performances that don't necessarily distinguish them from other recordings ("It's You Or No One"), while others stand out for a variety of reasons. Hiraki's introduction to "You And The Night And The Music," which takes the music into classical waltz territory with plenty of delicate oom-pah-pahs, helps breath new life into an old song, and her melodic tag-team work with trumpeter Ryo Sasaki on a low key take of "Autumn In New York" is as pleasant as a breezy walk through Central Park in October. The requisite Latin-influenced numbers come in the form of a samba-ish "So In Love" and a bossa-based "Ceora," while "What Is This Called Love"—which highlights the horn work of Sasaki and alto saxophonist Nick Hempton—shifts between swing and Latin surroundings.

While Hiraki's piano playing and arranging elevate the majority of these numbers above the pedestrian, her singing doesn't measure up to her other talents. Of the three numbers with vocals, Johnny Mercer's "Dream" is the most successful, due to the succinct nature of the song and the overall vibe of the piece, but "Day By Day" feels uncomfortable and stiff and the title track lacks spirit. While these occasional missteps point to Hiraki's musical Achilles heel, the remainder of the material is, to borrow a line from Cole Porter, easy to love. Hiraki harnesses her piano prowess and releases it on these chestnuts, bringing class and talent to deserving songs of yesteryear.

You And The Night And The Music; It's You Or No One; So In Love; Autumn In New York; Ceora; You Don't Know What Love Is; I Wish You Love; What Is This Thing Called Love; Day By Day; The Night Has A Thousand Eyes; Crazeology; Dream.