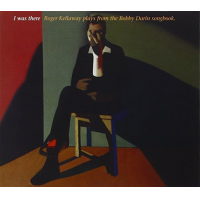 I must confess that I have never cultivated much knowledge about or particular interest in the singing of Bobby Darin. On the other hand, I am most interested in Roger Kellaway, the mention of whose name instantly pricks up my ears. Kellaway is a pianist and composer as phenomenally talented as he is under-recognized.

After playing piano and bass at the New England Conservatory in the late '50s, he worked with Kay Winding, Zoot Sims, Al Cohn, Clark Terry and Bob Brookmeyer in the mid-'60s before moving to Los Angeles. There he played with the innovative Don Ellis Orchestra before becoming the musical director for Bobby Darin in the late '60s. This activity, together with immersion in the studios, composition of more than 25 film scores (he received an Academy Award nomination for Barbara Streisand's A Star Is Born), playing with Tom Scott, and recording with his Cello Quartet, largely kept him out of the jazz mainstream for the better part of twenty years. Since the mid-'80s, however, he has primarily been playing jazz; his 1991 Maybeck Hall Recital in arguably one of the most individual and delightful concerts in that extensive series.

Release of this CD is timed to coincide with the release of the new film biography of Bobby Darin entitled Beyond the Sea. In addition, beginning this month (December 2004), Kellaway is touring the country with Kevin Spacey (who stars as Bobby Darin in the film) doing his own vocals on tunes associated with Darin. Kellaway has worked extensively with Spacey to prepare for his musical performances in the film.

This outing is nothing less than charming. In nearly 72 minutes, it warms with rich harmonies, sparkles with ebullient good humor, surprises with versatility and unpredictability, and dazzles with virtuosic technique. Periodically, Kellaway demonstrates his grounding in the stride style, but he is just as apt to sprinkle in a bluesy turn or riff, erupt in a boogie vamp, or veer off on a little dissonant excursion. It is all in the service of the classic standards elaborated upon here, together with tunes associated with Darin, such as "Beyond the Sea" and "When I Look in Your Eyes," and one original celebrating his time with Darin, "I Was There."

My favorite, I think, is "The Shadow of Your Smile," which deliciously combines a syncopated rhythmic underpinning with a shimmering, almost Debussy-like luminosity. Spacey's voice is featured on the concluding number; although his ornamentation is a bit florid, his control is adequate, his pitch true, and his range considerable. I must say that, for an actor not known as a singer, his performance is considerably better than I might have expected.

Beyond the Sea; Charade; My Buddy; Just in Time; When I Look in Your Eyes; The Shadow of Your Smile; I Was There; I'm Beginning to See the Light; A Nightingale Sang in Berkeley Square; When Your Lover Has Gone; That's All; My Funny Valentine; All By Myself; Something in Your Smile.

Roger Kellaway- solo piano, added vocal on "Something in Your Smile."