Lars Bech Pilgaard: I Want You To Be Around Me 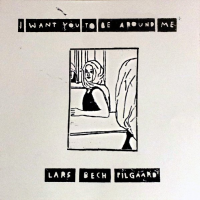 Danish guitarist Lars bech Pilgaards Slowburn is known for restless, left-of-center aesthetics that characterize his solo efforts and work in bands such as SVIN and Slowburn. In 2012 he released a limited edition, handmade solo disc featuring mostly low-fi recordings. Now he continues with the same collector's- item, do-it- yourself philosophy. This release featured only 100 12'' vinyl copies, with handmade covers.

I Want You To Be Around Me was recorded at the former train station Lygten in outer Copenhagen, enjoying great acoustics in the old stone building. Bech Pilgaard employs different tunings, preparations and alterations of his guitar strings and plays in an aggressive, noisy manner meant to reflect the rough west coast scenery of Denmark where he grew up. He often develops repetitive textures that morph into dark drones, loaded with buzzing overtones as on the 12-minute long "Give a Fuck." On other improvisations like the title track, he focuses on building impenetrable walls of metallic sounds, amplifying a disturbing atmosphere with shouts into the guitar pick- up.

Bech Pilgaard's musical vocabulary is more varied and often surprising. He adapts the sound of the west-African string instrument, ngoni, on the first "Intermezzo" and feedback- laden interpretation of the style of the great Malian guitarist Ali Farka Touré on "Little Björn" and "Tomgang." He pays a heartfelt tribute to the heavy blues funk of James Blood Ulmer on "Ulmer," and on a second, "Intermezzo," produces Middle- Eastern quarter tones that turn the guitar into a a psychedelic oud.

This release is fearless and rough, but invigorating in its uncompromising manner.

Katharsis; Intermezzo; I Want You To Be Around Me; Little Björn; Tomgang; Ulmer; Intermezzo; Give A Fuck; Hvim; Sletter.

Title: I Want You To Be Around Me | Year Released: 2014 | Record Label: Mom Eat Dad Records