William Parker: I Plan To Stay A Believer

By JOHN SHARPE
October 6, 2010
Sign in to view read count 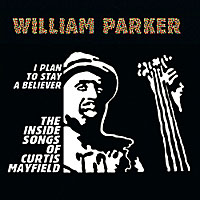 From the first few bars of the title cut opening "I Plan To Stay A Believer," the riffing horns, infectiously funky beat and expressive soulful singing of Leena Conquest quickly establishes` this as one of bassist/composer William Parker's most accessible projects. This set has been a long time coming. The idea of a tribute to legendary soul singer Curtis Mayfield first came up in discussion between Parker and pianist Matthew Shipp in 2000, overheard by producer Xavier Lemettre, who later called to book the yet-to-be-founded band. Since then Parker's eight-piece Inside Songs Of Curtis Mayfield ensemble has been a highlight of festivals across the world.

This double-CD package presents excerpts from six concerts over a seven year period, from their first ever performance in Paris in 2001 to their triumphant NYC debut at the 2008 Vision Festival and beyond. Typically, for Parker, the outcome is something more than a straightforward tribute. His arrangements take Mayfield's songs as the starting point only to fill them with adventurous musicianship and stretch them with his own musical material and additional gritty urban narrative from poet Amiri Baraka.

Conquest admirably holds center stage, her beautiful smoky voice enveloping Mayfield's lyrics simultaneously in joy and pathos. Mayfield was among the first soul performers to write his own songs and also to use them to address issues of African American pride and community. Fittingly then community involvement is achieved through the inclusion of choirs on five of the 11 tracks, ranging from a 90-piece children's choir on the Paris performances to the vibrant New Life Tabernacle Generation of Praise Choir in New York. Baraka raps alongside Conquest on seven tracks, and his occasional undue prominence in the mix is the only downside to these wonderful confections.

Parker's muscular bass forms the central golden thread embroidered through these performances, for the most part swinging with wild abandon, but periodically erupting into spectacular displays of kaleidoscopic bowing, like that which closes out the title cut. Sharing supercharged propulsive duties, drummer Hamid Drake keeps feet tapping even through some of the more outside instrumental breaks. Notable are Darryl Foster's grooving soprano sax on "Move On Up," Sabir Mateen's astonishing dog-bothering whistle with which he starts his tenor solo on "If There's A Hell Below," insouciantly mirroring the culmination of Foster's preceding soprano excursion, and Asim Barnes' subtly choppy guitar funk on "Freddie's Dead."

Though clocking in at well over two hours, the uplifting, irrepressible spirit with which Parker imbues Mayfield's tunes never flags, amply satisfying both head and heart.

CD1: I Plan To Stay A Believer; If There's A Hell Below; We The People Who Are Darker Than Blue; I'm So Proud/Ya He Yey Ya; This Is My Country. CD2: People Get Ready/The Inside Song; This Is My Country; It's Alright; Move On Up; Freddie's Dead; New World Order.