Laura Tate: I Must Be Dreaming: A Tribute to the Music of Mel Harker 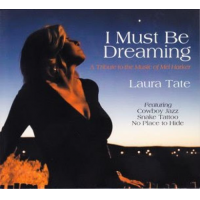 Were Bobby Short a woman and New York City's Café Carlyle a Dallas honky tonk, then he would be one Laura Tate playing a brand of roadhouse cabaret in her hometown. Tate's third recording (after Songs From My Suitcase (Self Produced, 2013) and Blue Train (Self Produced, 2014)), I Must Be Dreaming is a fine-tuned affair celebrating the songwriting of Californian Mel Harker. The result is a batch of well-conceived and well-behaved Americana that is both inventive and fun. Urbane and polite might be appropriate adjectives also. Harker's songwriting is as much the star here as Tate and the two make quite a pair.

Tate, channeling Harker's music covers a lot of ground, from the roadhouse country funk of "Snake Tattoo" to the New Orleans-Carribean tang of "No Place to Hide" to the Reggae-inflected "Counting Up The Ways." Tate excels on the "Cowboy Swing" pieces like the title tune, "Talk is Cheap" and "Cowboy Jazz." Tate sings with a jazz sophistication that has little of the unhinged abandon present in Mandy Lemons' or Eliza Neal's singing. This not a bad thing, offing the listener a larger plate of music from which to sample. The big band pieces make this recording sing.

Snake Tattoo; No Place to Hide; What a Way to Go; I Must Bbe Dreaming; Dead End Road; Talk is Cheap; If Forever Should End; Cowboy Jazz; Counting Up The Ways; Don’t Try to Talk Me Out of Loving You; Too Blue; Hold On (The Edge of Your Love).

Title: I Must Be Dreaming: A Tribute to the Music of Mel Harker | Year Released: 2015 | Record Label: Self Produced