Othella Dallas: I Live The Life I Love 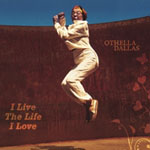 Othella Dallas has lived a rather picturesque life in show business, and tells her musical tale in I Live The Life I Love. Between the book-ending opener by Phil Moore, "Lil' Gal From Memphis," and Muddy Waters' closing "I Love the Life I Live," Dallas makes several musical side trips.

The CD booklet has the look of a nonfiction biography, featuring glossy photos of Dallas' life beginning with her career as a dancer with Katherine Dunham and career as a teacher within that organization after World War II. In 1954, she appeared on the bill at venues like the Apollo Theatre with artists including Sammy Davis Jr., Duke Ellington, Sonny Stitt and King Curtis. Dallas opened her own ballet academy in Basel, Switzerland, while she continued to sing in European clubs. She worked with former Woody Herman saxophonist Sammy Nestico during the 1980s as well as Slide Hampton and John Gordon's Trombones Unlimited.

The music is arranged by John Di Martino, who does a fine job of connecting the twelve-piece ensemble to the each track's specific mood. The album opens with a faux Jamaican Dancehall introduction, setting up Dallas to begin her autobiographical tale of "Lil Gal From Memphis" with some sort of rap, but instead reciting the eight line introduction a la Rex Harrison in My Fair Lady (1964). With the first chorus she begins singing the lyrics, stressing that, no matter how fancy or worldly her travels, Dallas just prefers "beans, rice and barbeque ribs."

A fully fledged reggae pulse propels Peter Wydler's (Dallas' son) "On My Way Back Home." Bobby Sharp's "Blues for Mr. Charlie" presents a view of hard times under presumed segregation, accompanied by Joe Barbato's soulful accordion, effectively cushioned by the ensemble. Ray Charles' "I Believe to My Soul" kicks with a very similar arrangement to the late singer's Atlantic version.

The inclusion of tunes including Hoagy Carmichael's "Georgia," Ellington's "Do Nothing Till You Hear from Me" and Cooley/Davenport's "Fever" are rather routine fodder, Dallas's voice has certainly weathered at the age of 82, but she does manage to sound energetic and lively.

Track Listing: Lil' Gal From Memphis; Help The Poor; One For My Baby; On My Way Back Home; I Believe To My Soul; Blues For Mr.Charlie; C.C.Rider; Do Nothing Till You Hear From Me; Fever; Georgia; Bird In the Sky; Birth of the Blues; I Love the Life I Live.

Title: I Live The Life I Love | Year Released: 2008 | Record Label: Self Produced