Bob Stewart: I Concentrate On You 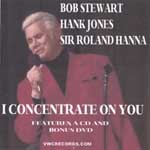 In 1956, Bob Stewart and the members of the Mat Mathews Quintet recorded twelve tracks at the New Jersey studio of Rudy Van Gelder. Let's Talk About Love, originally released on the Dawn label, was digitally remastered in 2005 and licensed to Fresh Sound Records, now called simply Bob Stewart. Listening to this music from fifty years ago, one hears a first-rate jazz crooner. Stewart's voice has deepened since this recording, as his 1990s albums, largely on his own VWC label, attest. His sound here could be compared to that of Mel Torme or Dick Haymes.

Stewart's baritone voice is a throwback to the days of quality jazz vocals. At the time of his first recording in 1956, he was placing in the Down Beat polls of the leading ten best male singers, but with the rise of rock 'n' roll and Elvis Presley, everything changed. A drastic career change brought Stewart to Brooklyn's Sheepshead Bay, where he studied for and obtained a captain's license and eventually operated his own ninety-foot charter boat. A meeting with pianist Harold Danko resulted in Stewart's return to singing, and this latest release was recorded in two sessions featuring the late Sir Roland Hanna in 2002 and Hank Jones in 2004.

These fourteen selections from the Great American Songbook offer an opportunity to hear recent recordings from Stewart with these two separate small combos. His burnished tone is especially evident on ballads like the title tune, "What Are You Doing The Rest Of Your Life?", "The Gentle Rain" and "Wrap Your Trouble In Dreams." The Hank Jones group provides solid support, with effective solo work from the pianist as well as trumpeter Glenn Drewes. On the selections provided by the Sir Roland Hanna ensemble, both the pianist and saxophonist Gary Keller add coloration.

As an added bonus, a separate sixty-minute DVD concert is also provided, in which Bob Stewart performs in Yonkers, New York with both the Tedd Firth Trio and the Vigril Scott Orchestra, singing the same fourteen tunes. Visually, it offers an opportunity to see Stewart's comfort level with the musicians and audience as he sings and introduces each of the songs. However, the audio portion of his vocals on this DVD proves to be a disservice to the artist.

The One I Love Belongs To Somebody Else; The Masquerade Is Over; A Cottage For Sale; You Make Me Feel So Young; I Concentrate On You; I'm Gonna Sit Right Down And Write Myself A Letter; You're My Thrill; These Foolish Things, Love Is Just Around The Corner; The Gentle Rain; What Are You Doing The Rest Of Your Life?; Smile; After You've Gone; Wrap Your Troubles In Dreams.