I Called Him Morgan by Kasper Collin 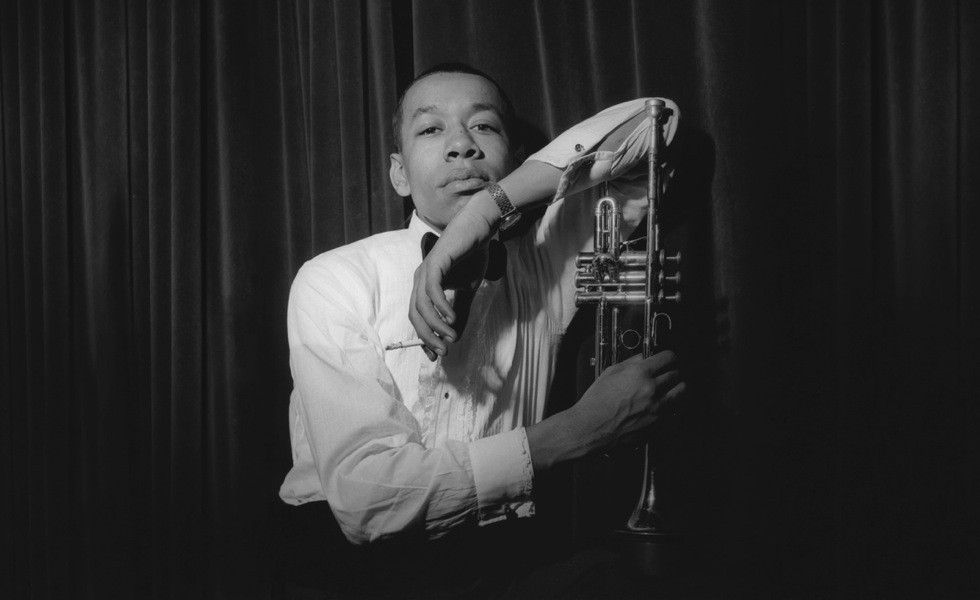 By CHRISTINE CONNALLON
March 24, 2017
Sign in to view read count
Lee Morgan
I Called Him Morgan
A film by Kasper Collin
2016

Forty five years ago on a precariously snowy night, prolifically talented jazz trumpeter Lee Morgan was fatally wounded at Slug's Saloon in the East Village of New York City, shot down by his common-law wife, Helen, in front of horrified friends and fans at the bar of the venue. Kasper Collin's haunting documentary I Called Him Morgan is a revealing portrait of a musician filled with equal parts greatness and demons, as well as the woman who saved him only to eventually end his journey.

Morgan gained attention when he emerged onto the bebop scene from Philadelphia in the mid-1950s. At the age of 18, he joined Dizzy Gillespie and His Orchestra, full of raw talent, refined polish and brilliant ideas. Moving on to tour and record with Art Blakey and the Jazz Messengers after Dizzy's group disbanded, Morgan's career skyrocketed and he went on to record 25 albums for Blue Note Records, including composing The Sidewinder a rare crossover hit that entered the pop and R&B charts. He collaborated with a number of musicians, creating friendships and bonds that sustained through the years and the hard times that were to come.

One of the many highlights of the film is the veritable who's who of jazz greats who paint a picture of Morgan. Wayne Shorter, Paul West, Billy Harper, Larry Ridley, Bennie Maupin and Charlie Persip are just a few of the storytellers who reminisce about Morgan, their friend, colleague and partner in crime, showing his humanity through their stories. The pain of losing Morgan as well as Helen is apparent, with grief written on their faces as if the tragedy happened recently.

ADVERTISEMENT
Rare interviews with Morgan himself are hidden gems and provide charming insight. "I find that the essence of creativity is the newness of things," Lee remarked in an interview with Val Wilmer in his apartment on Grand Concourse in the Bronx in 1971. "And the only way to keep things new is to have constant changes in environment and surroundings and people, and all of that, you know. And that's the thing that makes it so exciting about being a jazz musician."

Morgan's own music provides the perfect musical backdrop for the film. Another technique that Collin employed to capture the spirit of Morgan was the use of gorgeous black and white still photographs. One source of the shots was Francis Wolff, one of the founders of Blue Note Records who was also a photographer. He captured thousands of incredible images of Morgan and his fellow musicians in the studio and during all sessions. Laughing, smoking, dancing and creating, these photos are rare glimpses into the joy that was apparent, though gone for nearly half a century.

Along with the joy were the dark times. Heroin addiction derailed Morgan's meteoric rise. Club owners were hesitant to hire him, as his drug use made him unreliable. Morgan pawned his trumpet, shoes and coat during the harsh winter of 1967. His path crossed that of Helen More, some 13 years his senior. She was a member of the jazz community, opening up her apartment on West 53rd Street in Manhattan to musicians and always ready with a home cooked meal for fatigued musicians. Helen, touched by Morgan and worried about him with his lightweight jacket, went to the pawn shop and reclaimed his possessions. From that point on, the two were inseparable as she helped him return to the music community and get clean. Though they never formally married, she took on his last name and was known as his wife. Helen was instrumental in booking the gigs for his band, handing all managerial duties and letting Morgan focus on his strength—the music itself. The no-nonsense Helen was an integral part of their social circle of musicians and other friends. Morgan became involved with the Civil Rights movement and worked with the Jazzmobile, helping to bring music to the younger generation.

"I don't believe in labels in music, period...," Morgan shared in his own voice, from the 1971 interview. "If you ask me what would I call our music...the best thing I'd come up with would probably be Black Classical music. But then, that's even a broad term."

Fast forward to February of 1972, as an imminent blizzard headed for New York City, an ominous tone had been cast over the Morgan's relationship. A love triangle emerged and despite conversations and promises, the situation culminated in Morgan's death at Helen's hand, bleeding out at the bar of an East Village jazz club, the heavy snowfall delaying the ambulance nearly an hour.

Helen's own story is told in first person, thanks to a cassette recorded interview that took place a month before she died in 1996. In the late 1980s, Larry Reni Thomas, a jazz radio announcer, writer and one-time All About Jazz contributor in Wilmington, NC crossed paths with Helen as he taught adult students. When he realized who she was, he asked to interview her. Eight years later, she granted the opportunity. Thomas' scratchy cassette recording is truly the heart of the film, giving viewers the chance at long last to finally hear Helen's own account of what happened that fateful evening.

Moody and ultimately cathartic, Collin creates a milieu of love, loss and human frailty. I Called Him Morgan is a poignant look into the life and death of an artist who should have still be creating music today, if not for ultimate twists of destiny.