By GENO THACKARA
November 13, 2017
Sign in to view read count 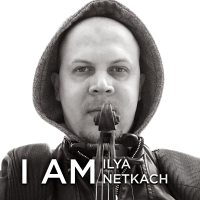 No stranger to traveling, Ilya Netkach has absorbed a range of ideas between growing up in the Ukraine and (at the time of this release) teaching violin in the United Arab Emirates. A statement of identity such as I Am can't help showing all such personal sides, at least to the extent a five-track EP allows. The original intent was for a full-length recording—and that may still be possible somewhere down the road—but for this release he's chosen to focus on material developed during a particular stretch of time living in Qatar and Bahrain. The middle-Eastern setting is indeed a key factor in shaping the flavor of these performances, while those other facets still creep in around the edges to make an eclectic and encompassing listen.

Netkach developed the pieces through a succession of multiple takes, keeping jazz's spirit of improvisation as they took shape without needing to strictly compose anything. A bed of keys and electronic beats provides a static groove foundation while his silky violin flutters and sings on top. There's a deliberate progression in tones from beginning to end: the opening "Burned Bridges" is a plaintive violin/piano duet with a classic feel of eastern European folk, while each subsequent track adds another modern electric element to take things further into fusion territory.

Its middle stretch has some light swooping up and down scales in the mold of Western fusion, but for the most part the affair stays rooted in the controlled patient trance of Eastern music instead. He sticks to slow and subtle melodies, steady trills or circular patterns, keeping things simple while each piece's overall shape drifts or builds as needed. Netkach stays frank and spontaneous in the moment while choosing each note with care, and the result is an exotic work that feels over in a blink, but still says a lot in a short time.