By DAN MCCLENAGHAN
March 17, 2019
Sign in to view read count 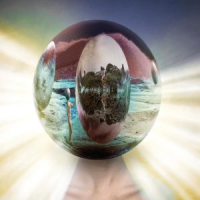 Coming up with a title for a recording is an art form, and creative oddities pop up regularly. In 1963 bassist Charles Mingus presented Black Saint and the Sinner Lady (Impulse! Records); 2014 saw the release of saxophonist Branford Marsalis' Four MFs Playin' Tunes (Marsalis Music). And now the group Chat Noir moves in a more cerebral direction—in terms of titles—with Hyperuranion...

"In Plato's universe, the Hyperuranion is a realm of ideal forms where the soul waits before entering the body, inspiring humanity's search for truth and beauty on Earth."

Given the passing of time and the evolution of musical expression over the centuries, Plato probably would not know what to make of Chat Noir's Hyperuranion. But the sound is, in its own spacey and inorganic way, a manifestation of that always elusive truth and beauty.

The group's founding members, keyboardist Michele Cavallari and bassist Luca Fogagnolo, are joined here by guitarist David Calvi, drummer Moritz Baumgartner and, on four tracks, Norwegian trumpeter Nils Petter Molvaer. A band that began as a piano trio, much in the mode of E.S.T and The Bad Plus, has evolved into a "virtual studio" outfit, sharing files over a cloud-based system then putting it all together in an in-studio collusion. The sounds they make are unclassifiable—call it ambient techno-groove jazz, or sci-fi soundtrack electronica, or synth boogie.

The set opens with the torrid, electrified "Blisters," nodding to the Beatles' "Helter Skelter," even including the original shouted lament "I'VE GOT BLISTERS ON MY FINGERS!" wrapped in a hard-driving techno embrace. "Humanity" rides a sludgy, bass-heavy rhythm combined with a futuristic Phil Spector wall-of-sound backdrop, with Molvaer's trumpet floating out of the electronic murk. "Immediate Ecstasy" evokes images of dancing bodies packed tight on a dim dance floor, undulating in unison to the dreamy groove.

Molvear's trumpet soars through the rhythmic fibrillations of "Quasar," on one of the more ambient and surreal segments of the recording.