By GLENN ASTARITA
February 20, 2015
Sign in to view read count 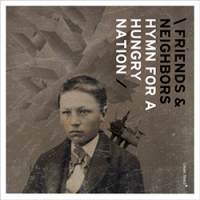 This Norwegian band derives its moniker from one of saxophonist Ornette Coleman's slightly overlooked units Friends and Neighbors, culminating in the 1970 release Live At Prince Street on the Flying Dutchman label. But the impetus for the ensemble's doctrine resides in the expressive 60s era where Coleman, and other like-minded pioneers often ravaged conventional sensibilities of the jazz vernacular. Here, the good news is that these musicians do not simply rehash the paths previously traversed but provide a dynamic incursion, combining old and new free-jazz tactics, partly inspired by Coleman's holistic harmolodic principles.

Stating that this group is vibrant is basically an understatement. It's largely about asymmetrical injections of loosey goosey and complex improvisational fluctuations, combined with an egalitarian collective mindset. The musicians' agile progressions alternate between highly melodic theme building episodes, subliminal noise-shaping tendencies and and when executing methodical buildups, often augmented by Andre Roligheten's sawing lines.

The soloists are offered ample space to stretch their wares during these semi-structured plots, bleached with a host of Ornette-isms. They zoom in for the kill, intimating quite a bit of camaraderie along the way, emphasized by impressionistic exchanges and wily segments that go off the radar. But things get a little hectic on "Skremmerud," where the quintet navigates through rush hour traffic, complemented by the hornists' glaring choruses; although, they descend back to earth during the bridge then bang out the primary theme one last time for the finale.

Hymn For A Hungry Nation; Bolehogda; John’s Abbey; Give Me Jarrison; Skremmerud; Ceramic Inside; Vocals On The Run; Heading South.