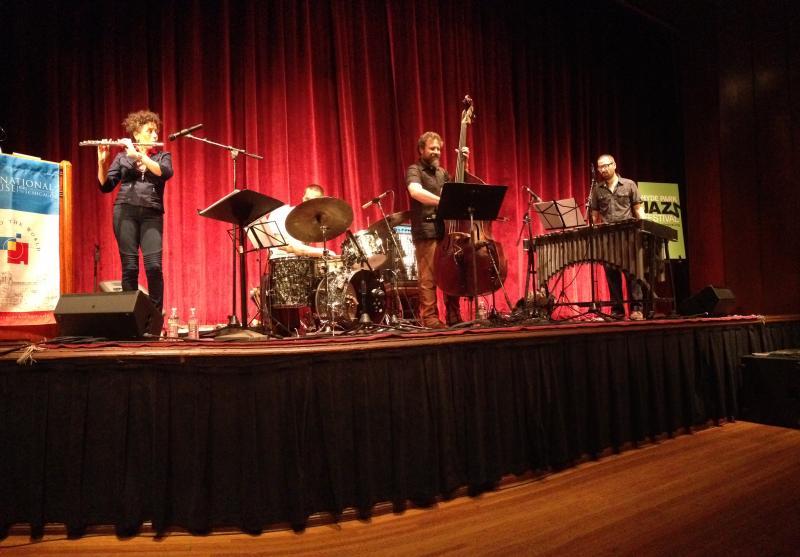 The good folks at the Hyde Park Jazz Festival have a problem. Now in it's eight edition, the two day affair has attracted throngs of intelligent jazz listeners and too many 'must see' jazz acts. This year's festival held September 28-29 featured 40 performances divided between two Midway Plaisance outside stages and ten visually stunning buildings on the University of Chicago campus. Planning which bands to catch where took an advance degree in logistics and strategic planning. Patience and the acceptance of opportunities missed were also required.

The music was divided between large crowd pleasing statements like Houston Person's Quartet, Etienne Charles & Creole Soul and the more intimate performances such as vibraphonist Justefan (aka Justin Thomas) duos with bassist Tim Ipsen. The latter duo performed to a limited audience of just 60 listeners inside the Robie House, which like Western Pennsylvania's Falling Water is a famous private residence designed by architect Frank Lloyd Wright. Waiting for admission to catch the duo meant that you might have to forgo another act.

No such waiting was required for Ari Brown's Quintet at the Midway. The appreciative crowd (and it was a crowd) heard Chicago's elder multi- reedist open the festival with "Softly As A Morning Sunrise." On tenor, the echoes of Sonny Rollins and Gene Ammons were heard. Avreeayl Ra favored some musical mischief behind the drum kit. Brown's cover of John Coltrane's "Lonnie's Lament" began with the familiar, but morphed into a raggae beat. The music, which avoided gimmicks, maintained the proper respect for the masterpiece. With the crowd now firmly on his side, he continued to make friends with the funk drenched "Rude Awakenings" complete with a two horn tribute to Rahsaan Roland Kirk.

From the indulgent outdoors to the intimate, cornetist Josh Berman presented twelve pieces of the quietest loud jazz heard at the festival. Inside the confines of the Penthouse on the 9th floor of the Logan Center is a 100 seat performance space with a dramatic view of the University of Chicago. Together with bassist Jason Roebke and the Nelson Algren of drummers Frank Rosaly, Berman opened with "Blues" played as if the three were recalling a distant memory or a dream of the blues. Berman's cornet draws from Don Cherry and Bill Dixon and can pop notes like hiccups or provide a slurry of sound that has no hipster irony, but it is just so freakin' hip. "Cold" played out like a noir film theme with Rosaly scrapping cymbals and Roebke tapping bass. The music was outward bound, yet on a piece like "Your Uncle" with Rosaly swirling a ball in a metal bowl and Berman stuttering notes the music doesn't eschew swing. Maybe that's just a Chicago thing.

If the familiar local musicians gave the crowds what the expected, and certainly wanted, Detroit-born, New York resident JD Allen came to Chicago to conquer. His trio, plus Philadelphia pianist Orrin Evans entered the Logan Center Screening Room with an appetite for a {John Coltrane}} Quartet take-no-prisoners rush, Evans in the McCoy Tyner role and Allen barely pausing to breathe. His overblown horn and drummer Jonathan Barber's attack (more Tony Williams than Elvin Jones) created its own weather patterns. Allen's trio with Barber and bassist Alexander Claffy barely had space to fit Evans' sound. The pianist often sat just listening, waiting for the saxophonist to hesitate, then diving into his own mad rush of notes. Not for the weak of heart, Allen's music is muscular, exhilarating and satisfyingly dynamic.

The signature event of the festival was Craig Taborn's solo performance at the magnificent Rockefeller Chapel. The ecclesiastical architecture of this massive space lends awe to the late night event. Taking cues from his modern masterpiece recording Avenging Angel (ECM, 2011), the pianist opened with his left hand echoing his right hand's single notes. His playful approach of single notes expanded into a series of chords, which further developed into textures of Gospel and hints of Aaron Copland's "Appalachian Spring." Taborn's improvised performance hark back to those of Keith Jarrett, but he is also applies Cecil Taylor-like runs and has an appetite for pulse that is all his own. The one thousand plus audience clung to every note of his 40 minute opening piece. After a short pause, he began a shorter improvisation with a repeated 4-note passage that called to mind the motif from the 1977 film Close Encounters of the Third Kind. Taborn utilized the repetition to launch his performance and maintain his thoughts.

Rumor had it that many other performances were remarkable, including cellist Tomeka Reid's Hear in Now string Trio, Dana Hall's Black Ark Movement, and Geoff Bradfield's tribute to Clifford Jordan and Lead Belly. But like a good fisherman, I guess you have to leave a few in the lake for next time.