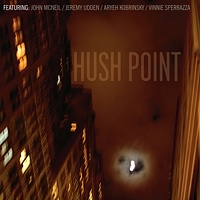 The quartet Hush Point conjures the possibilities of small group hipness. One that quips instead of guffaws, and prefers covertness to the obvious.

Led by John McNeil, this quartet of saxophonist Jeremy Udden, bassist Aryeh Kobrinksy, and drummer Vinnie Sperrazza may be new, but McNeil's sage coolness isn't. The sixty-something trumpeter has been delivering hip since the 1970s with the Horace Silver Quintet and the Thad Jones/Mel Lewis Orchestra. As with his previous recordings with saxophonists Bill McHenry, Chill Morn He Climb Jenny (Sunnyside, 2010) and Allan Chase East Coast Cool (Omnitone, 2006), McNeil chooses congenial partners. Udden's alto recalls the sound of Paul Desmond and Lee Konitz, and the rhythm section of Sperrazza and Kobrinksy are primed for sonorous expression.

Drawing from a West Coast tradition (McNeil was born in California, but is a longtime East Coaster) the music summons a Jimmy Giuffre/Shorty Rogers vibe. Covering two Giuffre compositions, "Iranic" and "The Train And The River," the quartet exudes a genial prosperity with Udden sounding extra dry throughout. Sperrazza sticks solely to brushes here, which effectively allows the players to utilize a wider range of sound. With little competition for space, Udden and McNeil tradeoff with a fair trade sound. McNeil's trumpet purrs and growls, yet maintains an affable illumination. Udden's "B. Remembered," written for Bob Brookmeyer, summons early Chet Baker/Gerry Mulligan sounds. McNeil's "Get Out"(based on "Get Happy") is an insouciant gambol of sound. The formalized casual nature of Hush Point is its calling card.

Iranic; Peaceful; B. Remembered; Bar Talk; Fathers And Sons; Finely Done; New Bolero; The Train And The River; Get Out; Cat Magnet.