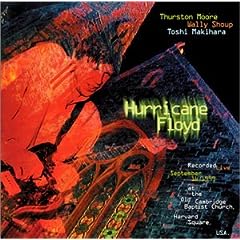 The title of Hurricane Floyd, as you might imagine, has two meanings. First, it describes the meterological phenomenon ongoing during the performance (yes, hurricanes do actually make it to Boston on occasion). Second, it refers to the intensity of the free improvisation which occurred in the shelter of the church where these three musicians briefly joined forces. Now it must be said up front that not all of this performance falls into the category of 'stormy,' but the most ecstatic and enthralling moments definitely have a striking emotional edge. (The last track, for example, has plenty of quiet moments where the tension simmers without boiling over.)

At some point in its history, free improvisation embraced an important sound concept from John Cage. Improvisers gradually recognized that their instruments deserve to be liberated from their design. In the same way the prepared piano divorced itself from the standard version, this group consciously steps free from the traditional sounds of a saxophone/guitar/drums trio. Saxophonist Wally Shoup rarely plays melodic lines in the usual sense, preferring twisted, overblown arcs of sound in the Aylerian tradition. (On portions of the last track, he employs an organic bluesy tone as the foundation for the squeaks and squeals that evolve.) Guitarist Thurston Moore of course has the distortion pedal generally cranked, and he scratches and scribbles at the guitar to the point where individual tones cease to be identifiable. At peak intensity, the only discernable guitar sounds are shiny glittering bursts of square waves. (One gripe: the hum from his amp provides an unrelenting backdrop to the performance, even when he's not playing.) Drummer Toshi Makihara relies on a fairly standard reduced kit, but he too refuses to fall into any simple category of sound. From a third-person perspective, he assembles an ambivalent assortment of polyrhythms, cymbal bursts, and snare rolls which conform to the flow of the improvisation more than they define it.

The third track on the record provides a brief but welcome respite from the unbroken tension of the first half of the record. (In the original gig, this piece came first. But in the wisdom of tracking the CD, producer Jonathan LaMaster saw fit to rearrange things a bit.) On the solo track "Altar Boy," Moore ventures into uncharacteristically resonant folky textures—before travelling right back "out." Then the three-way conversation that came earlier resumes in earnest. Hurricane Floyd is hardly a record for the average jazz listener; these are, after all, hardly average players. But tension in free improvisation is sort of like hot pepper spice: once you've had a taste of it, you find it can boost your enjoyment of all sorts of other flavors. Either that or you run back to the blandness of salt and pepper.