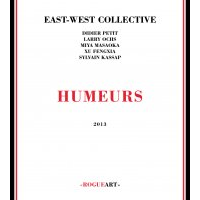 The East West Collective constituted one of the surprise hits of the 2013 Vision Festival in New York City. As their name implies the five strong outfit comprises improvisers from both the Occident and Orient. Their origin lies in French cellist Didier Petit's regular visits to the Far East, often with clarinetist Sylvain Kassap in tow, where he perceived a connection between Chinese traditional music and European improvisation. Guzheng player Xu Fengxia and koto exponent Miya Masaoka were invited to join for tours in France and America, and with the addition of reedman Larry Ochs (the "O" of the ROVA saxophone quartet, and a frequent collaborator of Masaoka), the East West Collective was born.

Overlapping passages distinguished by combinations of unusual sonorities and careful listening form one of the unit's defining traits. Rarely does the whole ensemble play at the same time. While some segments verge on the abstract others are unexpectedly tuneful or rhythmic, especially those in which Masaoka or Fengxia evoke reiterated guitar like motifs. Although all but one cut is generated on-the-fly, the sleeve notes intimate that Petit furnishes strategies or road maps to guide at least some of the pieces. If so they must be very light touch as they leave no compositional signature. No-one dominates as egos are checked at the door. Although theatrical elements occur in performance, particularly from Petit who echoes his countrywoman Joëlle Léandre in his use of voice, they do not impinge on the recorded sound.

Even when the instrumentation goes through constant flux, the collective pulls off the trick of maintaining momentum. Och's episodic "By Any Other Name (for William Kentridge)" provides a case in point as cello and both reeds revolve around an elegiac broadly sketched melody, before a scratchy section which ultimately gives way to strummed koto and guzheng, suggesting a deconstructed blues. Further metamorphoses take place before a return to the two horns in loose fugue. Extended techniques are used sparingly and unobtrusively, such as Kassap's bass clarinet multiphonics at the outset of "Humeur de Terre." Each of the selections is characterized by restraint, which makes the sequences when they do all come together stand out in sharp relief, serving as emphatic punctuations in a subtle but rewarding discourse.