By DAN MCCLENAGHAN
May 6, 2014
Sign in to view read count 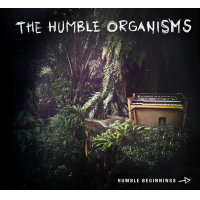 The opening of the group Humble Organism's Humble Beginnings, "Hello Jansen," with its big bright organ wash and prowling bass, a rumbling set of drums laying down a backdrop, seems to say: "Kick back, baby. You're gonna get in the groove with some organ jazz." And it doesn't sound "humble." To the contrary, its a brash sound the group crafts. Rock energy, soulful grooves, a tasty guitar from Hans Luchs that rips into the shredding category quite often.

Call these guys funksters. Arrangements are tight, and influences such as Chicago's Deep Blue Organ Trio, Sly and the Family Stone and Stevie Wonder are mentioned. They cover rock and pops songs with style: Eddie Vedder's (Pearl Jam) tune from 1991, "Evenflow," gets as dance-able as a song can be, with drummer Maxx Popp snapping and popping, and bassist Andrew Vogt laying down a serious funk rhythm. Pop Songstress Adele's "Rolling In The Deep" features Vogt, on bass synthesizer, noodling along in a guitar-like, Frank Zappa, Hot Rats (Reprise Records, 1969) groove in a closing solo over the vamp; and Humble Organism's version of Steve Miller's 1976 hit "Fly Like an Eagle" shames the vapid arrangement of the original, injecting a big dose of soul, with guitarist Luch's snapping tight lines inside Dan Chase's wall-of-sound organ, before Chase gets his chance out front and goes all groove-master on us.

"Pearhofjax" comes from bassist Vogt, and it's hard to imagine listening to this live and not dancing. Guitarist Luchs teamed with Vogt to co-write three distinctive tunes, including the closer, "Charades W/ Professor X," with drummer Popp intro-ing with a roiling drum solo that gels into an tight ensemble workout before everybody gets a chance to step out front.