By JACK BOWERS
December 2, 2018
Sign in to view read count 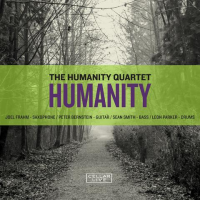 Music with a message? With a name like the Humanity Quartet and a CD titled Humanity, one might certainly presume no less. Music designed to help save the world from itself? Well, that's an exceedingly tall order. The Humanity Quartet, bassist Sean Smith writes, was indeed created with such a lofty goal in mind, "recognizing the need to bring mankind together through music." Jazz, he further argues, "is music for all people to enjoy. It is the sound of freedom. Human beings in the far corners of the earth might not always be able to communicate or agree on certain things, but thankfully the power of music . . . can break through the barriers of language, culture, politics, religion, race, greed, fear and inhumanity. In essence, it is for all humanity and there is hope."

Hope? Yes, there is always hope. Reality? That's another matter entirely. In spite of its stated purpose, the quartet (whose other members are tenor saxophonist Joel Frahm, guitarist Peter Bernstein and drummer Leon Parker) is unlikely on its own to engender world peace and harmony where so many other well-meaning groups and entities have failed. On the other hand, it can do no harm to espouse such aims and to set about doing whatever is in one's power to ensure their acceptance. From that point of view, Humanity (the album, that is) is quite admirable, even though it represents only a tiny drop in the ocean of tolerance and good-will needed to draw the diverse and largely inflexible peoples of the world closer together, as every drop, no matter how small, is useful.

So much for philosophy. What of the music, you may ask. And on that front there is good news indeed. The handsome program consists of ten by and large engaging originals, seven by Smith (including, of course, an aria labeled "Humanity"), the others by Frahm. Marya Lawrence adds a wordless vocal on the bustling "Samba for Evandrea." Frahm, the melodist-in-chief, is an astute navigator who swings at any tempo, and his supporting cast is hardly less so. While Frahm's burnished yet forceful tenor generally leads the charge, the eagle-eyed rhythm section cushions him at every turn, and Bernstein adds another likeable solo voice. In sum, a consistently pleasing quartet date, and if it fails to save the world, kudos for at least having made the effort.

A Good Thing; Song for a New Day; Irving; End of the Line; Humanity; Samba for Evandrea; A Whole New You; Tears; Jobimiola; Spring Standard.