By CHRIS MOSEY
October 6, 2019
Sign in to view read count 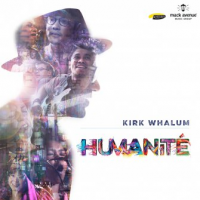 The saxophone solo on Whitney Houston's "I Will Always Love You" was the work of Kirk Whalum. He played too at the memorial concert for African American astronaut Ronald McNair, killed when the space shuttle Challenger blew up during take-off in January 1986. He's no great shakes as a vocalist but Humanité features guest appearances in this department by the likes of Brendan Reilly, Robyn Troop, Mi Casa, Afgan, Liane Carroll, Andrea Lisa, Zahara and Keiko Matsui.

The album was recorded all over the world—from the quiet English seaside town of Hastings, to up-market districts of Tokyo. Whalum also stopped off in Jakarta, Nairobi, Johannesburg, Paris, London and—last but by no means least—Memphis, Tennessee, his birthplace.

Why he chose to spell Humanity the French way remains a mystery, one that is compounded by a reference in the liner notes to humilité.

The first track, "Everybody Oughta Be Free," starts with ethereal saxophone, followed by the title repeated again and again. It gets tedious. "Don't Get Me Wrong (I'm Grateful)" is up-tempo and more of a finished product, though again the title is repeated a little too many times for comfort. This is a love song: "I'm taking a breath every time I lay my eyes on you; What did I do to deserve your love?"

"Wake Up Everybody" is one of those "clap hands and save the world" songs. Its rationale is clearly stated: "The world won't get no better if we just let it be. We've got to change it, just you and me." Then "Wildflower" takes the opposite tack, with "Don't wake the baby" lyrics—"Sleep is the only freedom that she knows."

On "Get Your Wings Up," declares Whalum in the liner notes, "With one voice—at times with words—we speak." He plays nicely on this one. As does Andrea Lisa on electric guitar. Though, again, there's too much repetition of the lyrics for comfort. "Korogocho" is a tribute to the slum of the same name on the outskirts of Nairobi, It features Whalum on soprano sax.

Move On Up; Everybody Oughta Be Free; Don’t Get Me Wrong (I’m Grateful); Wake Up Everybody; Wildflower; Get Your Wings Up; Now I Know; SJL; Korogocho; Blow 4U; Peace; We Shall Overcome You; From The East To The West.