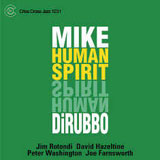 Alto saxophonist Mike DiRubbo's most recent outing for Criss Cross features the Jackie McLean protege in the fast company of trumpeter Jim Rotondi, pianist David Hazeltine, bassist Peter Washington and drummer Joe Farnsworth (two thirds of the sextet One For All) in a set that showcases his growing talent and expansive command of the jazz idiom.

Like his mentor, DiRubbo is no run-of-the-mill neo-bopper. He has his own unique sound on the saxophone, which while clearly primarily McLean-influenced, also exhibits an almost equally strong semblance to Pharoah Sanders' in its timbre. Similarly, his expansive musical vocabulary exhibits a solid foundation in the bebop tradition that has been judiciously elevated through a liberal addition of post-Coltrane modality.

The date starts off typically enough with a hard bopping original from DiRubbo called 'Transfer' that successfully conjures the composer's intended imagery of having to change trains in a busy subway station while rushing to a gig. It's followed by a relaxed rendition of Hazeltine's already classic arrangement of Mancini's 'Moon River,' in a moving performance that predates the pianist's fine Manhattan Autumn version by nearly six months. 'Human Spirit' is an appealing folkish melody by the leader that clearly displays his affection for Sander's sound and style while exhibiting his own skill as a composer outside of the more traditional jazz arena. 'Minor March,' by Jackie McLean, is DiRubbo's first recording of one of his mentor's compositions, and this blistering version is a truly fitting tribute to both its composer's success as teacher and his student's skill as a player.

The beautiful ballad 'North Shore Reflections,' another composition by the leader, displays an introspective character that contrasts convincingly with the uninhibited exuberance of the date's brisker offerings. DiRubbo's encyclopedic knowledge of the classic jazz repertory, reinforced through years of service at the Jazz Record Center, is shown in his inclusion of Hank Mobley's rarely heard 'Bossa For Baby,' one of the tenorist's prettiest tunes, while his lyrical 'Throwback' shows him to be a capable contributor to the genre's future himself. The disc's closer, Rotondi's up-tempo 'Down,' is another hard bop burner that gives everyone a chance to show off at what they do best'breathe fresh life into the idiom that is very much alive and well.