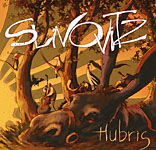 For fusion to have any auditory impact these days it arguably has to be played with a twist, something to take it beyond the level of a series of technical exercises. As a band, Slivovitz seems to realize this, but the degree to which it transcends the self-imposed limits of the idiom is questionable, especially when the music often breaks down into technical display—the only contrast to which appears to be more of the same, with added flourishes drawn from other cultures, as if the band wants to work a seam of world music even while it deals in the currency of flash.

"Dammi Un Besh O" exemplifies the point, especially when violinist Riccardo Villari conjures forth images of Balkan folk dance. Saxophonist Pietro Santangelo provides an interesting contrast, however. On alto sax his sound is kind of pinched, but that potential drawback is countered by his ability to generate heat, his rhythmic momentum injecting further urgency into proceedings that are already not without them.

Funk is not something the band is unfamiliar with, as on "Sono Tranquillo Eppure Spesso Strillo," where singer Ludovica Manzo proves the importance of non-verbal communication before the vocalizing becomes more of a communal affair and the headlong rush of the music is reduced to an end in itself.

A certain weakness in the compositional department leads, perhaps inevitably, to a feel generated by a group of obviously highly competent musicians jamming, complete with the implication that they're playing for each other as opposed to making music with an eye on posterity. Thus, while "Ne Pesce" is loose from the off, the substance seems pretty thin. By dint of his individual tone again—this time on tenor sax—Santangelo brings something to the proceedings, even though he doesn't succeed in taking the music to a higher level.

That feeling of musicians simply going for it, regardless of what precisely "it" might be, isn't present on "Sig M Rapito Dal Vento," the tantalizing theme of which suggests the band is capable of far greater light and shade when they give the music some air.

"Me Carne" exudes a similar feel, where a measure of reflection again provides a welcome contrast to the predominant proceedings. The sense of economy the band exudes on this one is perhaps inevitably at odds with the momentum that's all over the place elsewhere, but the flow of the music, whilst it might be an end itself, at least has the effect of pricking the attention in a way that isn't uniformly so across the disc.