How to Listen to Jazz by Ted Gioia

By C. MICHAEL BAILEY
July 13, 2016
Sign in to view read count
"As you develop your listening skills, [answer this question]: Are the musicians playing the notes with precision, almost as if they are reading music from some Platonic ideal score, or are they handling them roughly, torturing them to make them speak the truth?"

I see [Billie Holiday] more as a diagnostician of the soul, whose music reaches into those vulnerabilities and emotional risks that many of us avoid or actively repress.

Ted Gioia, How To Listen to Jazz

It is somewhere between here and there that one can grasp the essence of music listening. Music listening is a contact sport that can take you to rewarding and often uncomfortable places. Ted Gioia encourages us to go forth mindfully. It is how all art is to be handled. 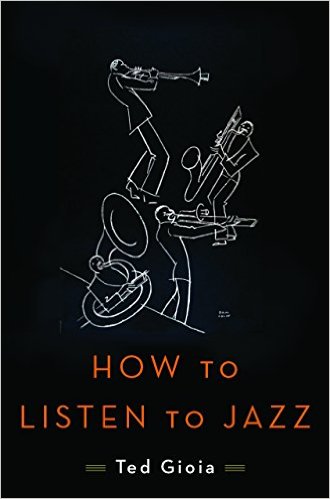 Music critic and historian, Ted Gioia's How to Listen to Jazz is not the first in the jazz primer genre. In 1966, esteemed jazz writer Martin Williams published Where's The Melody: A Listener's Introduction to Jazz (Pantheon Books). Reading it, 50 years later, in concert with Gioia's fine updating, is both illuminating and delightful. Gioia and Williams have much in common and the half century between their respective books is glaringly and necessarily apparent. It is worth noting that when Williams published his book, Louis Armstrong, Duke Ellington, Count Basie, Miles Davis, John Coltrane, and Ornette Coleman were all living. Mindful of this, Gioia calibrates his focus more sharply when considering the past while opening his interpretive aperture on the future of jazz.

How to Listen to Jazz is written with the same economy Gioia used in his previous books, including his four essential histories: West Coast Jazz: Modern Jazz in California 1945-1960 (Oxford University Press, 1992), The History of Jazz The History of Jazz (Oxford University Press,1997), Delta Blues: The Life and Times of the Mississippi Masters Who Revolutionized American Music (W.W. Norton & Co., 2009) and The Birth (And the Death) of the Cool (Speck Press, 2009). Gioia is masterful at squeezing every unneeded adverb and adjective until they squeal and run away. His writing is academic without being pedantic and always focused to the point.

In this slim, 250-page primer, Gioia first addresses that most elusive of jazz terms, swing which he describes as a synergistic pulse in the music that reveals a certain threshold empathy reached by band members. Further he posits that swing may best be heard or understood by listening to its lack in a performance compared to master performances. Gioia's view overlaps my own, more physics-based interpretation. In Newtonian Mechanics momentum is defined as the mathematical product of mass and velocity. Velocity may be easily enough understood as tempo, while mass can be seen as the interaction of several subatomic particles, including the recently discovered Higgs Boson, the particle that imparts mass to its higher constituent. Swing is the Higgs Boson of jazz.

Gioia begins to build his presentation from the sub-atomic point of swing into its requisite higher orders. He first breaks down jazz performance, in terms of tone and color, into: phrasing, Pitch and timbre, dynamics, personality, and spontaneity, with lengthy descriptions of each. Next, the author addresses the structure of jazz with examples of the blues, ragtime, and jazz standard (32-bar) structures. These descriptions provide the basic tools to help the listener better understand what he or she is hearing.

Next, Gioia hits his historic stride with a tightly-crafted presentation of the origins of jazz, followed by its evolution to the present day. He is thoughtful and brief in his recommendations of what to listen to from each milestone in jazz history. Before leaving the past, Gioia gives brief descriptions of the most important jazz artists in the art's innovation and evolution. These include (and there are no surprises): Louis Armstrong, Coleman Hawkins, Duke Ellington, Billie Holiday, Charlie Parker, Thelonious Monk, Miles Davis, John Coltrane and Ornette Coleman. After 30 years of listening, who am I to argue. If pressed for the highpoints, I would cite this same, august group.

The author devotes much needed attention to jazz as it is performed today citing globalization (no longer just an American art form), hybridization (each culture adds its own spin), professionalization (the academy looms large), and rejuvenation (there will always be those who look backward and forward) as being the catalysts sending the music forth into its certain, rich future. And, according to the author, this future is bright.

Gioia concludes his discussion with how he approaches, ..."every new record, every performance, with optimism and (borrowing the words of lyricist Sammy Cahn) high hopes...Perhaps this sounds naïve, the breathless enthusiasm of a fan, not the sober reflections of a future critic and music historian, but I still can't imagine approaching jazz any other way." This very thing is what 25 years of music writing has done for me, only universally. I can never wait to see what will happen next: what new music I will hear, new books I will read, new people I will meet. I love it when I am surprised and delighted (no simple feeling) at something new I learn or experience. And I always greet this new with the wonder of a child, built low to the ground, discovering something new and fascinating. In that, I suppose St. Matthew (and Ted Gioia) to be right in saying, "unless you are converted and become like children, you will not enter the kingdom of heaven." The "kingdom of heaven" being enlightenment, personal growth, and the experiencing of what is good.