How to Listen to Jazz: A Q&A with Ted Gioia

My goal with How to Listen to Jazz was a simple one, but also challenging: I wanted to provide an entry point into jazz for newcomers, but do it in such a way that even a very knowledgeable fan would find something useful or insightful on every page. —Ted Gioia 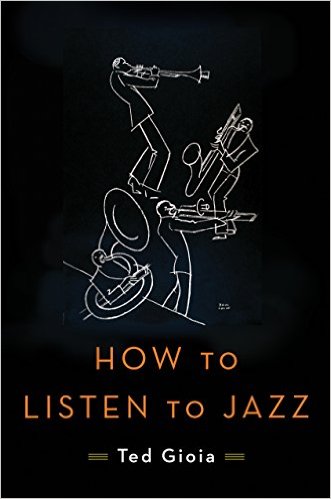 In How to Listen to Jazz, Ted Gioia has tasked himself with writing a book that asks people to drop their musical prejudices and open up their ears. The challenge in writing a book like is to find a middle path between, as Gioia says, "those who pretend that music is objective science and those who insist it is "subjective whimsy..." For my money, he has succeeded; talking about the nuts and bolts of melody, harmony and rhythm in a clear, comprehensible, knowing way, while finding myriad ways to communicate the joy ("jouissance") in the music.

Ted was kind enough to respond to some questions I sent him.

One of the foundations of the book is that there are standards that are inherent in the music. Talk about the process of teasing these out. If you want to grasp the dangers of imposing external standards on the music, just look at the long, sad history of warring camps in the jazz world. In the 1940s, traditional jazz musicians complained about bop because it didn't sound like Louis Armstrong. And modernists dismissed traditionalists who didn't know the bop licks. A few years later, a similar battle erupted over the merits of West Coast jazz versus East Coast jazz. This was followed by protracted controversies over free jazz, fusion, the new traditionalists of the 1980s, etc.—indeed almost every new style led to diatribes and confrontations, and a strange situation in which listeners were told they had to choose between the combatants.

Finally, the jazz wars seem to have ended. Okay, we have a few skirmishes on the border—I saw an exchange of fire a few days ago on the Kamasi Washington front—but this is all child's play compared with the full-scale battles of days gone by. And I will be the first to celebrate the cessation of hostilities. Let's enjoy the peace dividend.

But there's a larger lesson at stake here. Different genres and subgenres bring with them their own standards, and make different demands on us. My enjoyment of the music—and my understanding of it—have been enhanced by trying to live up to these demands. Our response to the music comes with a responsibility—two words that derive from the same etymological root. And part of that responsibility is to enter into the distinctive worldview and templates that come embedded into the music.

Why was it important for you to bring in your own experience in learning how to play this music? This book is more autobiographical than anything I've ever written. I felt that the best way to teach readers how to listen to jazz is to share the path by which I learned to listen deeply to the music. Between the ages of 15 and 25, I spent around 10,000 hours at the piano, and many more hours studying the performances of the best musicians I could find, in person or on record. My subsequent work as a music critic and historian is built on this foundation.

What did I learn from that apprenticeship? Sad to say, I learned to appreciate the greatness of the masters through my own mistakes, and through all the slow, hard work I put into gaining fluency with the basic building blocks of the music. I struggled and fought my way through every aspect of jazz, from how to start and end a phrase to how to how to create rhythmic misdirection and float over the beat. I really didn't possess a mature grasp of jazz until I was in my late twenties and, in retrospect, I've often wished I had been a more precocious learner, or had had access to skilled teachers. I really taught myself, and a day at a time. It's no exaggeration to say that I had to invent my own pedagogy. But this slow path brought some advantages—I developed analytical and methodological tools that have proven invaluable in helping me conceptualize and articulate what's going on in the music. I draw on these hard-won learnings in How to Listen to Jazz, and I feel that I have dealt with a number of key issues in a way that hasn't been done in other books on the subject.

Can you flesh out this quote a bit: "We can tell that we are encountering a real work of art by the degree to which it resists [your emphasis] our subjectivity." Some people will tell you that our responses to music are purely subjective. But everything I've learned about music runs counter to that claim. My previous book on love songs describes in great specificity quasi-universal qualities in music that cut across cultural and individual differences. The same is true in my books on work songs and healing music. Music critics and historians ignore these factors at their own risk. They undermine their work to the extent that they believe they can impose their whims or ideologies on the music.

ADVERTISEMENT
In the course of reading jazz and blues history, I've never encountered your interesting points that statistics used to track diseases can also tell us about the spread of jazz and that looking at African-American farming plots can help trace the genesis of the blues. Why do you suppose more of this cross-discipline work hasn't been done-or have I simply missed it? I learned these analytical techniques through sheer happenstance. In my early twenties I studied the diffusion of innovations at Stanford Business School. My professors had no intention of teaching me skills I could use in writing music history books, but I later saw how these predictive models could answer key questions in my research into early blues or traditional love songs.

By the way, my readers would probably be surprised by how much my analysis of music has been enhanced by studying microeconomics, game theory, statistics, business strategy and other issues outside the typical purview of music critics. This is true of both my writings on music history but also my writings and talks on the current music industry.

I love that you call those who deconstruct and recombine musical memes "the gene splicers of jazz." Why did you choose that metaphor rather than alluding to the idea of "influences"? The notion of influence tends to promote linear and static thinking. But when we apply the metaphor of DNA and genetics to our discussions of musical evolution, we can grasp the dynamic and complex nature of these processes with more insight.

Take for example, saxophonist Lester Young. A static lineage model would tell you that he was a major influence on Stan Getz and a handful of other postwar saxophonists. End of story. But a better way of understanding his impact is to look at how his expansion of a 'cool' vocabulary, with its emphasis on melodicism and understatement, entered into the global music DNA—and could be adapted by anyone seeking a certain kind of aesthetic experience. Once you view Lester Young in that way, you start hearing how he shaped movie soundtracks, bossa nova, pop music, a cappella vocal arrangements, even classical works such as John Adams' recent sax concerto. You understand Young better by viewing his innovations—which were essentially genetic mutations in the sphere of music—in this wider context.

You have a definite brief against "global entertainment corporations." Tell us why and what you think might be done to ameliorate their negative influence. I listened to more than one thousand new releases last year, and I am on track to do the same this year. I cast a very wide net in my listening—I check out all music genres, and though I pay attention to highly-promoted commercial releases from the major labels, I also listen closely to little-known projects from small indie labels and self-produced albums.

This is a large investment of time, but it gives me valuable insights into the priorities of the global entertainment corporations. I can see what they are choosing to promote, and compare it against the projects they turn down or ignore.

And what do I learn from this? My conclusions are depressing ones. First let me share the good news: there is more outstanding music recorded today than at any point in history. But here's the bad news: it's harder to find than ever before. The big entertainment corporations are doing a terrible job of scouting talent, nurturing it, and giving it a platform to reach a large audience. There's a crisis in the music business. And this isn't just my personal opinion—just look at sales figures and financial statements, or talk to the talented musicians who are trying to build careers in this environment.

Why are labels making such bad decisions? We can speculate on the causes. I would love to give an ear test to folks making decisions at the major labels. How skilled are they at actually hearing what's happening on a recording, and grasping what the musicians are doing? And then I'd like to give them a polygraph test to see which is more important to them, promoting artistry or making money? And, then, I'd like to have a test to gauge their degree of commitment to musical values, and their courage in pushing against the groupthink and conformity of the huge corporations that employ them. Finally, I would like to compare these results against those of the visionary label execs from today and the past—people like John Hammond or Manfred Eicher or George Martin. I have a hunch we would find some answers to our questions, no?

Do you have a specific idea who the audience will be for this book? Do you hope it will work its way into the educational market? I've been blessed with great readers. I hear from them all the time—especially in the last few years, with the rise of social media and worldwide connectivity. And I learn from them too.

Many of my readers are musicians, some of them absolute masters of their instruments. Others played in bands in the past and have transitioned to other careers, yet still have big ears and trained sensibilities. Some have never had musical training, but care deeply about the music. This very smart audience keeps me honest. I have them in mind while I write, and that helps me avoid glib and facile treatment of the subjects at hand.

I try to write in such a way that every one of these readers is served by the book. My goal with How to Listen to Jazz was a simple one, but also challenging: I wanted to provide an entry point into jazz for newcomers, but do it in such a way that even a very knowledgeable fan would find something useful or insightful on every page. I'll leave it to others to judge whether I live up to that goal.

This reader says he does.