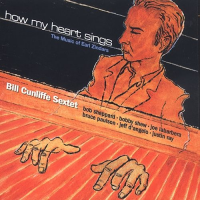 On this record subtitled "The Music of Earl Zindars," Bill Cunliffe pays tribute to the composer who wrote the jazz standard "How My Heart Sings," which began life as the exclusive property of Bill Evans in 1956. Throughout a lengthy friendship and business relationship, Evans championed a number of Zindars' songs, such as "Elsa," on his many recordings. There are probably scores of musicians who have also recorded the title song, including vocalist Kim Parker, daughter of Bird, about 20 years ago. For the first time, Cunliffe is bringing the Zindars songbook to the full attention of the jazz public. Did you know that Earl Zindars recorded an album in 1980 with the Don Haas Trio?

This CD credits Bill Cunliffe for his piano work. What it should report in neon lights is that this is also the work of Bill Cunliffe, arranger. He does a superlative job of translating the Zindar songbook into a series of creative and harmonically fascinating set pieces. I would have been loved to see what this guy could have done with the Stan Kenton organization. Sometimes it's hard to tell where the quality of the song leaves off and the beauty of the arrangement begins, but that amounts to musical quibbling. Cunliffe makes the sextet sound like a larger ensemble per charts and musicians who are almost always playing a line behind the soloist. On the opening "Here's To Neil," Bob Sheppard doubles on alto and tenor sax. One the title tune, Cunliffe and Sheppard, this time on flute, play the melody and then Bill Evans' original Riverside solo in unison.

If Bobby Shew is out there somewhere, I'd like to thank him for decades of countless sessions in which his name was in small print on the label during the '70s and '80s and for the few sessions in which he was the Man for such small but important labels as Pausa, Sutra and Inner City. His work here is impeccable and his burnished solos always reflect lyricism and swing. Also present is flugelhorn player Justin Ray, who gets to solo nicely on "Mother of Earl." Trombonist Bruce Paulson also gets a chance to express himself on two occasions and does so quite effectively. Bassist Jeff D'Angelo and drummer Joe LaBarbera (a real live Bill Evans Trio member from the next-to-last group) also get some up-front time. Although much of this music is presented in a shifting harmonic texture of horns and rhythm, there are a few brief passages in which only Cunliffe and the rhythm section are heard, and it's possible to envision where Evans might have taken any particular tune.

Although Earl Zindars' raison d'etre was presumedly his creation of a single song, he is fortunate enough to have a leading jazz musician who wisely chose his oeuvre as a showcase.