Mytha: How It All Started 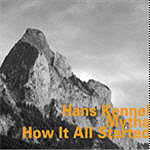 Extraordinary is an over-used word, but it applies to this album, and then some. The music is made almost entirely by Swiss alphorns, heavy wooden horns ten-to-twelve feet long, straight except for their bulbous curved bells, which rest on the ground, the player standing at the business end, gripping the instrument's neck with both hands and, one imagines, bringing new meaning to the word "blowhard." Alphorns look cumbersome and lumpen on an industrial scale, and it's hard to imagine them making even the most rudimentary music, let alone jazz.

But appearances can be deceptive. Although limited in range (there are no valves or keys), the alphorn produces a surprisingly soft and mellifluous tone—another mountain long horn, the Tibetan dung, made of copper, produces an altogether rougher, harsher sound—and, when played by a virtuoso, the alphorn is remarkably nimble.

Brahms and Leopold Mozart both wrote for the instrument, but so far as I know, Mytha is the first jazz band to feature it. The group was founded by the Swiss free improv and third steam trumpeter Hans Kennel in 1990 to celebrate the alphorn's legacy and, by the by, bring it into the jazz tradition. There are five players, four of whom double on the buchel, another long horn, but with a coiled construction, giving it greater range than its larger cousin. How It All Started is a compilation taken from Mytha (HATart, 1991) and Mytha Two (HATart, 1994).

Surprisingly perhaps, How It All Started contains enough variety and emotional range to engage the listener from start to finish, even with a playing time of almost eighty minutes. Some of the tunes are traditionally based; others owe more to jazz or third stream. "Call Of The Wild" is performed on parts of the dismantled horns. "Alphorn Of Plenty" is a canon written for Mytha by the American composer and street performer Moondog, during his final years in Europe. "Alpine Shuffle" and "Cart Dance" are foursquare in the jazz tradition. "Love" is just that, a blissful, healing tune. Polyphony is a near constant, with Kennel, who wrote most of the tunes, typically arranging for horns in several different keys. "Circle 111" is a ten-minute tour de force built on a deep bass drone, played by sixteen horns in four pitches.

The alphorn is unlikely to become a staple of the jazz line-up (though, if the clock could be re-wound, and no disrespect intended to Hans Kennel, I'd love to have heard Gil Evans with an alphorn section). But How It All Started—intriguing, inventive and sui generis—will reward listeners intrepid enough to give it a chance.