Hal Schaefer: How Do You Like This Piano Playing? 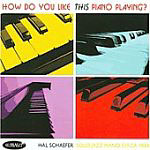 Hal Schaefer is a Hollywood musician jack-of-all-trades, at one time or another serving as a pianist, arranger, composer, and conductor. He got his professional start in the big bands of the Dorsey Brothers, Benny Carter, and Harry James. However, Schaefer kept the doors open by serving as a vocal coach to celebrities otherwise not singers, including Mitzi Gaynor, Susan Hayward, Robert Wagner, Jane Russell and Marilyn Monroe. It was Schaefer who provided Monroe the arrangement for her barn-burning "Diamonds Are a Girl's Best Friend."

Schaefer recorded these sides at his own expense, as documentation of his art and playing in the early 1960s. He subsequently stored the tapes, which survived a move and storage in a shed behind his house until his yard service notified him that an insect infestation endangered the building. Lo and behold, these 45 year- old recordings surfaced in pristine condition and are now being made available.

So, what of this long lost piano recital that Schaefer committed to tape on his own time and dime? It predates and predicts by almost 50 years Martial Solal's Live at the Village Vanguard: I Can't Give You Anything But Love (Cam Jazz, 2009). Schaefer shows a most post-modern disregard for strict form and actively improvises—not just harmonically and melodically, but tempo and rhythm-wise also.

Schaefer's longest daydream initiates the disc. He plays "There's No Business Like Show Business" like Vladimir Horowitz played "Stars and Stripes Forever," with over-the-top pomp and circumstance. Schaefer turns the show tune inside out, shakes it up, and pours it into a martini glass. "My Romance," "All The Things You Are," and "The Man I Love" are similarly transformed, all reconstructed and reassembled as new musical matter half a century old.

There's No Business Like Show Business; My Romance; Dancing in the Dark; All the Things You Are; Love for Sale; The Man I Love; Speak Low.

Title: How Do You Like This Piano Playing? | Year Released: 2009 | Record Label: Summit Records