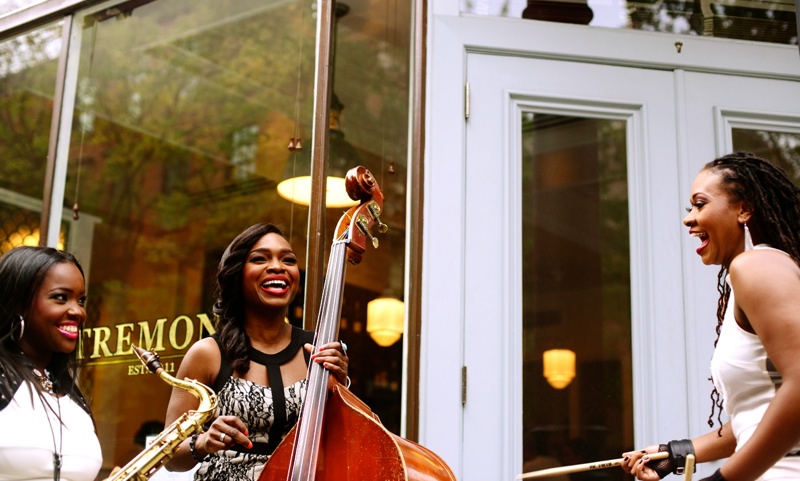 By JAKOB BAEKGAARD
March 12, 2014
Sign in to view read count
There was a time when the only possibility for an artist was to record for a major label, but nowadays things have changed. While major labels are struggling to make the money they used to do, many of them have also stopped being innovators. Instead, they churn out repackaged product and focus on new music that is guaranteed to sell. Patience and long term talent development isn't a thing that is seen very often.

Fortunately, in spite of this, the music business is in a very good shape and this is mainly because of the new indie labels that are popping up everywhere. Here, the focus is on the music itself and a lot of innovation takes place. Instead of fitting music into a narrow generic frame that already exists, the indie labels are expanding the frame itself. Genres become blurred and new music is created.

One of the most interesting new labels on the indie-jazz scene is Hot Tone Music run by bassist and singer Mimi Jones, who describes herself as: "A native New Yorker from the "Boogie Down Bronx." The motto of her label is also straightforward: "Creating Great Music of Today." Indeed, Jones has succeeded in creating an admirable contemporary sound where modern jazz meets pop, soul music, R & B and gospel. As it turns out, the blending of genres has always been a part of Jones' life: "I grew up listening to all types of music from soul to jazz to country music in my house hold. For example, on any given day I could hear Miles Davis' Kind of Blue, followed by Al Green's Let's Stay Together and "You Were Always On My Mind" by Willie Nelson."

However, there is one particular artist who has meant a lot to her: Miles Davis. Jones is familiar with all phases of Davis' illustrious career: "I studied his approach, which was simplistic ideas and phrasing, but always playing upon the listeners' emotions by using tension and release and choosing the blue notes. The entire series of Steamin, Workin, Relaxin and Cookin were like a bible to me. This is how I learned about the tone of a band and how important each function of the rhythm section is. Bassists Paul Chambers and Sam Jones taught me how important the tone of the bass is, and how it affects the overall band, the beat could be placed a little behind, dead center or a little on top, at any given moment, and to use harmonic leading to lift the sound and make it sound exciting."

"I was also influenced by Birth of the Cool and his work with Gil Evans is timeless... still so passionate, sensual, and intellectual at the same time. My favorite stuff to this day would have to be the stuff Miles did in the 60s with Ron Carter, Herbie Hancock and Wayne Shorter... this music helps me to understand life better, and learn how to take the good with the bad..."

With her love of music, it was natural for Jones to pursue education and she started early on: "I started at age 12, where I joyfully attended the Harlem School of the Arts, and studied classic guitar with Jim Bartow, and African dance class with Ms Rhymes. Eventually I would continue on to Music and Art High School, Jazz Mobile, Manhattan School of Music and begin my journey as a bassist under the tutelage of Lisle Atkinson, Linda McKnight, Barry Harris, Milt Hinton, Justin Diccioccio and many others jazz legends that mentored and gave me guidance."

Today, Jones has taken on the role of mentor herself. This process began when she started Hot Tone Music as an outlet for her own music: "I started the record label in 2009. At the time, many of my friends had been getting signed to major labels and some well- established Indie labels. I presented my stuff to a few to be denied, and realized I didn't have to wait for a stamp of approval. I had all the resources to do it, I just needed the courage, and I wanted to help others as well, since I noticed how many musicians actually get overlooked that have great potential, but are not supported, and blessed with what they need to develop. I had begun producing for my friends because I enjoy studio work and learning how to further careers, eventually I decided to claim these gifts or callings and go official, calling it Hot Tone Music, meaning hot as in great sounding music."

Hot Tone Music has its own sound and identity, but Jones is aware of both the history of the important jazz labels and the new indie labels when talking about the labels that inspire her: "Well of course major labels like Blue Note, ECM, Prestige and Motown because the level of quality and talent that we have come to trust from these brands. I never did appreciate the deals and splits of how the label recouped money, usually taking all rights and things. GOD only knows what went on behind the scenes, but these days I highly respect Indie labels, because it's here you can find some of the greatest stuff on these labels that take the time to check out music that is great but doesn't fit in a mainstream category. Labels were created for marketing purposes, but this usually pigeonholes the artists, forcing them to produce music a certain way instead of allowing the stream of consciousness to be the guide. Don't get me wrong, there must be order but the music sounds so much better when the spiritual element remains on some degree. Mack Avenue is doing great things, but I'm totally admiring Truth and the Revolution (Curtis Brothers), and Greenleaf (Dave Douglas). I feel like the Indies are more at liberty to create than the majors... so I'm biased."

The structure of her own label is built around the artists and as a label owner, Jones has many different roles, as she explains: "Right now we have 4 artists, including myself, with prospects of 3 more recording this year, and we have a corporate team of 7 including myself. My role is that of a director and artistic director. If someone recommends a new prospect, I listen for potential... because a project takes so much energy it has to be worth the risk. Also at HTM we have a development division which I'm involved in as well. So we aim to physically help potential artists to find their sound and make good decisions about their career planning, honestly I play mother hen to many and I've accepted this title (laughs out loud).

One of the things that is noticeable about Hot Tone Music is the many female artists, but, as Jones points out, it isn't a matter of discrimination. It's all about the music and giving the chance to those that deserve it: "It's funny how perception is because honestly there was one guy recording his cd and he would have been included among the releases, but due to life issues he was not ready, so we went with those who were ready and willing. HTM is for everyone, but I consciously reach out to women who have potential and may need a hand. We are still in a day and age where we need to encourage and support woman in music, so yeah I look out but only if they show strong desire and are willing to do what it takes, not because they are "female," they must be the right fit."

Elaborating on how she finds her talent, Jones says: "Talent is everywhere, sometimes I see street musicians and I'll go up and start talking. But these girls on the label, Shirazette Tinnin and Camille Thurman, are my peers. We work together in different circles and I love their sound. We have the "musicians grind" in common. We all want a better life but we are challenging ourselves to get that life doing what we love to do. We study together musically and business as well. We are 3 different generations and each of us has something valuable to offer. We are working out our flaws together as well. We are not waiting for a stamp of approval. It's time to move now."

Another musical collaborator on Hot Tone Music is the producer Ronnie Love Jones: "Ronnie is currently producing for hip- hop artists in Atlanta and songwriting as well for pop/soul artists. He wrote the music for my song entitled "Dream." He, like many other folks in the company, is an artist and then works in the corporate side of the company as well. We pretty much all want the same thing and so we have come together, because with a community change can happen.

Creating an album, including the package and design, is also a process of collaboration, as Jones reveals: "I have freelance photographers coming up in the game, and artists that were just thrilled to be a part of the movement and so we worked out deals and a barter system for some to get a lot of the work done. So it's a win-win situation for everyone, all the independent companies come together to create a win-win situation. And let's not forget our supporters, kickstarter donators, folks that come to our shows, they play a big role in the success of it all.

A particular studio has been used for two of the recordings on the label. Camille Thurman's Origins and Shirazette Tinnin's Humility: Purity of My Soul were both recorded at Samurai Studio, Queens, NY, with Dave Stoller as engineer: "I'd been recommending friends to try this new studio, and so out of good faith he created a "Mimi" rate, discounted so it allowed us to really get a chance to explore, instead of the entire budget going into the recording. Dave Stoller is the engineer and we had a lot of fun recording in this beautiful space that he built with his own hands. Yes, I can't stress how many independent business owners come together to make this label work."

"I'd also like to mention the excellent engineer that worked on my album Balance. He recorded Esperanza Spalding's Radio Music Society, Terri Lyne Carrington's Mosaic, and recent Money Jungle. His name is Jeremy Loucas and he is fantastic. The engineer that mixed and mastered all three albums is also an amazing engineer and made our creations sound better than ever. His name is Dave Kowalski. This team of production was phenomenal. These guys do so much work and get minimal credit, but without them where would we be?"