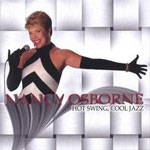 I'm in a quandary to describe this album of big band jazz vocals from Nancy Osborne as anything more than "pleasant." Through no fault of the singer or the top-flight band of West Coast musicians like Pete Christlieb, Gary Herbig, Charley Loper and Tom Ranier—or the arrangements of Bob Florence, Paul McDonald, Lon Norman, Jonathan Barick or Dave Wolpe—this album cannot be lifted into a higher category.

The best summary I can offer is that the album offers "safe" middlebrow jazz music. Several of the tunes are currently overexposed per the Great American Songbook (eg. "I've Got You Under My Skin," "It's Delovely," "Georgia On My Mind") and deserve at least temporary retirement. Osborne's voice is fine, with a bright quality that emphasizes the lyrics and hits a balance with the orchestrations, so that both are heard to their advantages.

However, this is a big band vocal album, not a jazz-oriented vocal occasion. There are a few false starts. "It's De-Lovely" begins with the opening riff of "Milestones" and "Something's Gotta Give" begins with Osborne's vocalese matching the horn lines, but this is a introductory tease for both songs. Nancy Osborne also provides effective vocalese on the instrumental break of "Gypsy In My Soul." I'd suggest that this is an excellent choice for afficianados of big band music in a contemporary setting.

Let's look at a few more positives. Osborne opens with a saucy version of Peggy Lee's "I Love Being Here With You" and concludes with Bobby Darin's signature song, "As Long As I'm Singing," which he usually used to close sets. "Pardon My Southern Accent" is an obscure Johnny Mercer tune from 1934 and "Two Lost Souls," borrowed from the Broadway musical Damn Yankees, is a nifty duet with Ned Rifkin. Osborne's take on "He's A Tramp" (from the Disney film Lady and the Tramp) once again emulates the style of writer and performer Peggy Lee.

I Love Being Here With You; Mister Sandman; Ding Dong! The Witch Is Dead; I've Got You Under My Skin; It's De-Lovely; Something's Gotta Give; Only You; And The Angels Sing; And All That Jazz; He's A Tramp; Pardon My Southern Accent; Two Lost Souls; The Gypsy In My Soul; Georgia On My Mind; Hallelujah, I Just Love Him So; As Long As I'm Singing.