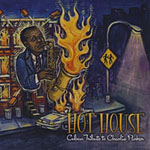 Over the last year, there have been a number of Latin tribute CD releases, incuding trombonist Conrad Herwig's The Latin Side of Wayne Shorter (Halfnote, 2008). Trumpeter Steven Gluzband's Hot House: Cuban Tribute to Charlie Parker tribute goes right for the "tribute jugular" of jazz with this entertaining, and highly interesting CD. Who better to honor than Bird himself—who, while revolutionizing both the pathway of jazz and the alto saxophone, frequently incorporated Latin tunes and licks ("Tico Tico" was a Parker favorite) into his performances and recordings?

This elegantly simple CD works admirably on a number of different musical levels: the solo and ensemble playing is excellent; and the selection of Parker favorites is Latin-appropriate. There are no inappropriate remakes, and the overall production has an understated, positive flair.

Gluzband, who has performed and recorded with Latin greats such as Celia Cruz, Tito Puente and Ray Barretto, shows Arturo Sandoval-esque chops and a keen rhythmic and melodic sense of nuance. From the first cut, "Red Cross," through the entire session he plays with the elegance, control and confidence of a machismo matador. The rhythm section pulses passionately and spins Latin and Afro-Cuban polyrhythms in a nicely sedated way. There's an overall sensitivity to melody on "Everything Happens to Me," "My Heart Belongs to Daddy" and, indeed, all of the selections. The tunes, many recorded by Parker, cover the rhythmic palette of Cuban dance-types, from the Mambo and Son to the Changui. All excel and subtly intrigue.

There's a clear authenticity to the offerings Gluzman and crew deliver. "Quasimodo" takes Bird's boppish composition and, using the Cuban Son rhythmic base, takes on an entirely different musical perspective. It's that way on all the selections here—positive, respectful and reverential to the Master—and quite passionate, too.

Hot House is a thoroughly enjoyable effort, certainly up to the task of honoring Parker, his compositions, and renditions. Gluzband and the Hot House crew pull it off most admirably. While he might or might not dance, Bird would surely tap his foot listening.